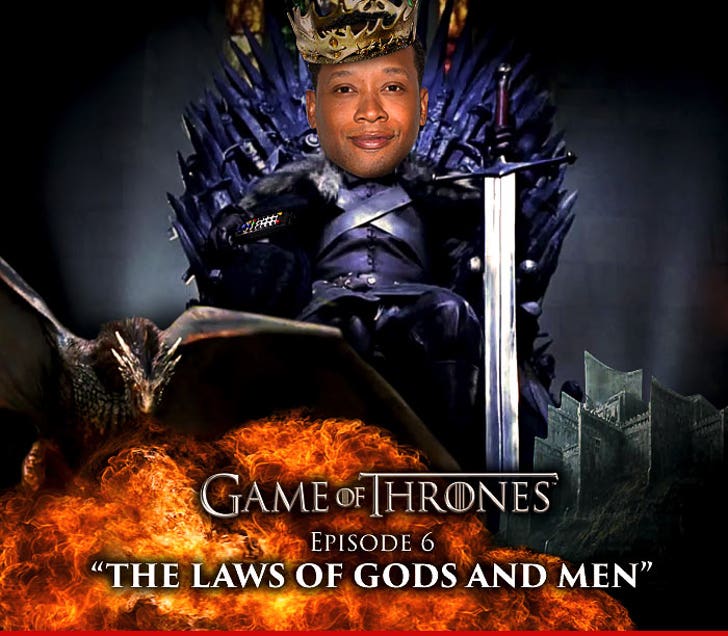 "I saved you, I saved this city, and all of your worthless lives!" -- Tyrion Lannister

Welcome to the Iron Bank. If you remember a few episodes back, Tywin Lannister was explaining to Cersei how the Iron Bank is ONLY loyal to one thing -- the coin. Apparently so.

Can't help but think how lucky Stannis Baretheon is to have Sir Davos as his representative. "T.V. Stannis" isn't like "Book Stannis" (that's another blog entirely) but bottom line ... it seems he'll now have the funds again to fight for the throne ... Look out!

Never thought I would write this next sentence about a man stuck in an animal cage, but, it's hard to feel bad to Theon Greyjoy.

We first met him as a ward of the Starks in Season One. Now, broken, captured and penisless ... he's "Reek" ... and he sleeps with Ramsey Snow's hunting dogs.

Enter the rescue team led by Theon's sister Yara Greyjoy, who rallies the Ironborn to save their mutilated prince. It's safe to say we all want a sister like Yara. First class badass!

Problem is, Theon's so messed up in the head (thanks to Ramsey) he thinks the rescue is a trick and retreats to his cage refusing to be saved.

Reek gets a weird sponge bath for refusing to betray his master. A new plot begins ..

Moving on ... because last night WE GOT DRAGONS AGAIN, BABY! However, they aren't babies anymore.

They're hungry. The see goats. They eat the goats. Darwinism thrives in Meereen.

I understand Khalessi (Daenarys Stormborn) feeling some responsibility to rule the territory she has recently conquered -- talk about being sidetracked, though. Khalessi recently received the news of a new, even younger King sitting on the Iron Throne, yet she has chooses to stay put. An army, three dragons, seasoned counselors. Yet our Khalessi is camped out in Mareen. Ramifications folks. This decision by Khalessi certainly comes with them. Stay tuned.

Meanwhile, back in King's Landing ...

Meek in its appearance, modestly dark in its shade. But don't be fooled, last nights counsel meeting is the beginning of those aforementioned ramifications for Khalessi. Tywin Lannister is not the kind of guy who sits around and lets someone else make the first move. Ramifications.

Here's a shocker ... Lord Varys isn't gay. He isn't straight either. He's completely asexual and THRILLED about it, claiming it frees him up to pursue the one thing he wants to mount ... the Iron Throne. That scene was gold.

The best scenes of the week were saved for the end. Finally, the trial of Tyrion Lannister!

I hesitated to write the word "trial" because it was more like an inquisition. Was there ever a chance for Tyrion? With a witness list he could never defend himself against, the little fella was doomed from the start. The painful final punishing blow was Shae (Tyrion's mistress) taking the stand against him. A women scored, indeed. With only Jamie Lannister as an ally, who could blame Tyrion for being fed up with this charade of a trial?

Tyrion finally let them have it, thankfully! This is going to get better folks ... with T calling for a "Trial by Combat?!" Oh. Hell. Yes.

If you've learned nothing else from watching this series, you should know Tyrion is usually a step ahead ...