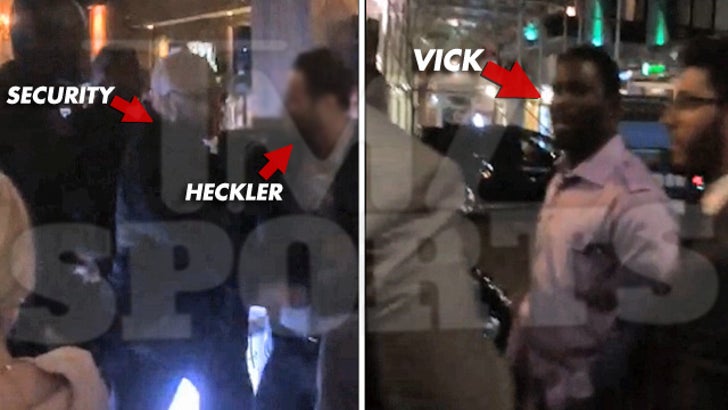 12:32 PM PT -- We spoke to Michael Vick about the incident ... who tells us, "I am not sure why this person was seeking attention. It's a reminder of how thankful I am for my fans."

Vick says he won't let the incident serve as a distraction -- saying, "I am more determined than ever to be a positive instrument of change for my family, my team and my community."

Mike Vick got some serious protection at a NYC bar Thursday night ... when security got physical with a heckler who was taunting the Jets QB about dogs ... and TMZ Sports has the footage.

Vick -- along with former Philadelphia Eagles teammate LeSean McCoy and others -- were hangin' out at The Ainsworth to watch the NFL Draft when the group was approached by a man holding a cell phone and screaming about a dog.

Sources at the bar tell us ... the man tried to get right up in Vick's face -- and that's when security stepped in, grabbed the man, and tried to physically drag him outside.

We're told Vick and his crew kept their cool during the incident ... and later went outside to check on the situation.

When they got outside the bar, security was still getting into it with the heckler -- and Vick and his crew just stood back and watched ... refusing to get involved.

The Ainsworth had no comment when contacted about the story.