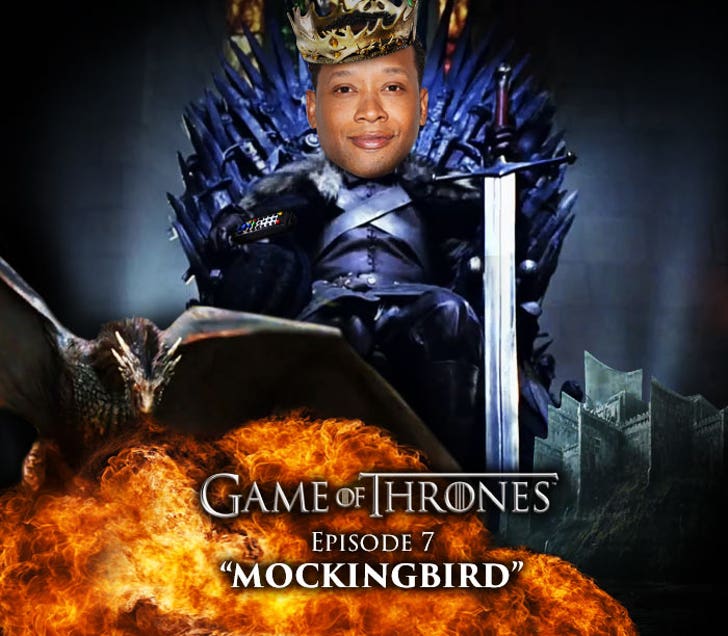 "What do we do with those that hurt the ones we love?"

We begin this week with the Lannister boys (Tyrion & Jamie) plotting in Tyrian's dungeon abode.

Clearly reeling from last weeks explosive final scene -- the demand for Trial by Combat -- the realization of Tyrion's dire situation is setting in. Who will come to champion Tyrion? It appears his options are severely limited. But more on this later...

Blood and guts anyone? Last night we were re-introduced to one of the more formidable characters on the show. As a former football player in the NFL, I've seen many big men on the field of play. There were few, if any, as enormous as Sir Gregor Clegane -- aka The Mountain. When Tyrion requested his trial by combat, he should have also realized the sister (Cersei) who wants him dead would find a find worthy foe. Although a brief scene, Cersei's meeting with the Mountain showed us that dude's got the skill to kill.

"Nothing isn't better or worse than anything ... nothing is just nothing"

Arya Stark is learning brutal life lessons. The adventures of our favorite weary duo continue with Arya and the Hound, Sandor Clegane. As we are reminded later in this episode, the Hound is the brother of the Mountain. A theme in this weeks episode -- siblings.

Fascinating to see the bond being formed between these two ... considering the Hound is on Arya's death list! A few big scene's this week for our duo. Arya won't hesitate to exact revenge. Her little sword gets it done. Needle to the heart and goodnight! Learning the ways of this cold world from a man she's sworn to kill. Who knew the Hound had a heart? Painfully recalling how he become deformed, a rare scene with the Hound showing, dare I say, feelings. Arya with an assist on the stitches. Yes, the bond between the two is growing.

Fresh off his triumph at Craster's keep, we jump to Castle Black and one of my favorite characters on the show, Jon Snow. Admired by his comrades, hated by leadership at Castle Black. You'd think the bosses would listen to a guy who spent a significant amount of time around their enemy. Negative. They threaten his wolf, shut down his plan, and stick him with the worst assignment at Castle Black. Lord Snow, indeed.

Back to our favorite dwarf in a dungeon, Tyrion Lannister. A visit from an old ally doesn't bode well for Tyrion. Bronn, his former right hand man is moving in prosperous circles now without him. His life has meaning. So much for the plan of Bronn being Tyrion's champion is his trial by combat. Who can blame Bronn? Nobody wants to fight the Mountain.

Daario Naharis has spent the better part of two seasons trying to get into Khaleesi's bed. His efforts finally paid off and he can thank the wild flowers. Noted. Just in time for Daario as he and his Second Sons troop are reassigned back to Yunkai. Khaleesi is about to set her provinces straight with brutal swiftness.

You never know who you'll bump into on The King's Road. On a mission to find Sansa Stark, a simple stop for lodging and grub turns into very useful information for Brienne of Tarth. First, she finds out Arya Stark is in fact still alive. This spurns a conversation from her squire about the only living Stark relative Lysa Arryn. Didn't you want to scream at the TV to tell them to take the other road? Alas, if only Podrick would have been sure of his information. A reunion with Sansa could have been near. Maybe it still is? Stay tuned.

BTW -- admit it, you suddenly want a piece of kidney pie.

Back to the dungeon of our jailed little lord Tyrion Lannister.

In an episode packed with good scenes, this one of the the best. A surprising visitor who shares a very surprising story. Prince Oberyn. Further proving Cersei's lifelong hatred for her brother, Oberyn shares a painful story with Tyrian from their childhood. "All anyone talked about was the monster born to Tywin Lannister." Ouch. Eyes full of tears as his prospects seem truly dire, in a surprise turn, Prince Oberyn steps up to be his champion. Revenge, good people, is a powerful ally. Tyrion's trial by combat is set, Prince Oberyn vs Sir Gregor aka The Mountain.

Off to the Eyrie we go for this week's final scenes. They usually save the best scenes for last on this show -- this week is no different. A rare moment of peace, Sansa Stark brief joy is interrupted by her twisted little cousin-husband to be. A small applause when she laid hands on him.

Lord Petyr Baelish doesn't miss much, does he? Always present, always plotting. You had to know when he "rescued" Sansa the way he looked at her what his true intentions were. Last night in the scene of the night they were made painfully clear. Slimy and slick Lord Baelish played Lysa Arryn to the left, right, and threw her down the middle. The middle off the sky whole, that is. Baelish started the domino mess with Lysa Arryn that precipitated a war which saw the death of many, especially the Starks. Her reward for obediently listening -- tossed out of the sky hole in her own castle. "I have only loved one women ... Only one, my entire life ...your sister"

Damn, cold world this Game of Thrones. I'm not going to act like I feel bad for Lysa, she was clearly off her rocker. Here's to the hope that someone gets to Sansa Stark soon, because Lord Baelish is plotting. How will Baelish answer For Lysa's death?

He's usually a step or two ahead, Stay tuned ...