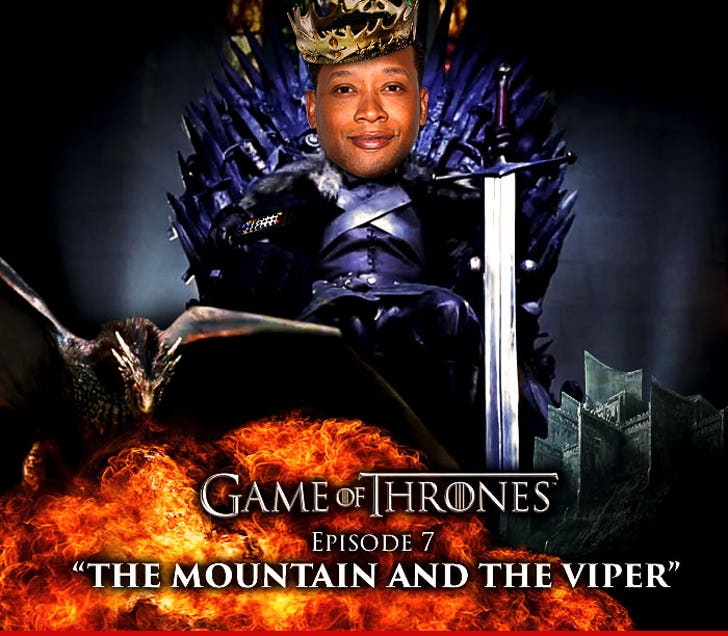 Soooo ... without further ado, here's Jamal's breakdown of last night's ep "The Mountain and the Viper."

Wow, this is a show where you keep thinking "How are they gonna top that?" ... and then they top that" OK, calming down ... let's begin at the beginning ...

Gilly. How lucky is this woman? The Wildlings attack her hideout ... they massacre everyone they find -- yet she's spared thanks to a sudden burst of mercy from John Show's old flame, Ygritte.

Take her to Vegas. Buy her a Westerosian lottery ticket. This chick like a walking 4-leaf clover.

Over at Castle Black, I'm bettin' the powers that be wish they would have listened to Snow -- because the Wildling are coming ... and it's about to be to go down on their home turf.

We cut to serenity (and naked bodies) in the land of our Khaleesi -- Meereen. This wouldn't be HBO without some naked bodies.

This time, it's Grey Worm doing some peepin' on Missandei. These two have been very close all season -- Grey Worm may get the girl after all. What he'll do with her, that's another story. WELP.

"What is dead may never die"

To the North we go as the twisted travails of Ramsay Snow, er Bolton, roll on. He's a sick but clever S.O.B. isn't he? Ramsay has the former Theon Greyjoy (aka Reek) completely in his control. He's basically a pet, sent to set up his own people. Damn.

They say the Ironborn don't surrender, but the fools who fell for Ramsey's trick learned the hard way ... the flayed man on the House Bolton banner isn't just for looks.

It's a huge win for Ramsay -- who impressed his father so much, Lord Bolton decides to give him the ultimate gift ... his family name. No way Ramsay Bolton is going to slow down now.

Just when it seemed like he might finally get his, Lord Baelish is saved by Sansa Stark. For a moment it seemed like Sansa was going to do the right thing and send him to his death. Negative.

Sansa, what in the hell are you thinking? She ain't a child anymore, but I'm not sure she's ready for Baelish. He's always a few steps ahead, yet even L.B. himself couldn't foresee Sansa coming to his aid. Sansa sold the Lords of the Vail with that performance, now Baelish has their ear ... and a plan for the little lord of the Vail. One must wonder will Robin Arryn meet a similar fate as his mother?

Baelish is slick, and he's got Sansa right where he wants her. Or is the other way around?

"You betrayed me, from the first"

We jump back to Meereen as Tywin Lannister's spy delivers a bombshell -- a signed pardon for Jorah Mormont arrives from King's Landing and it's intent was fulfilled. Tywin understands that he needs to weaken Khalessi any way he can. What better way then to disrupt her cabinet. Yes, Jorah once spied on his queen. He has since proven himself a worthy and trusted aid. That didn't matter much as Jorah was sent packing. Listen, it could have been much worse. Khalessi could have sent him to the dragons for lunch. By the way, where are the dragons? I digress.

So long Jorah. A sad departure in Meereen with ramifications that are sure to come ...

To the cold dark Vail we return. Our wayward two, Arrya & the Hound have finally arrived. Will they make it past the gate? Finally, we've got the two Stark girls in close proximity again but a meeting doesn't seem likely. That sinister laugh by Arrya Stark was just right. One Stark coming, one Stark going. Damn.

As usual, they saved the best scene for last -- THE RED VIPER VS. THE MOUNTAIN!!!

It's the fight that will decide Tyrion's fate -- Viper wins, he lives. Mountain wins, he dies.

With Mountain seemingly incapacitated, Oberyn calls for him to confess to the brutal things you did to his sister -- “You raped her! You murdered her! You killed her children!”

I love this show.