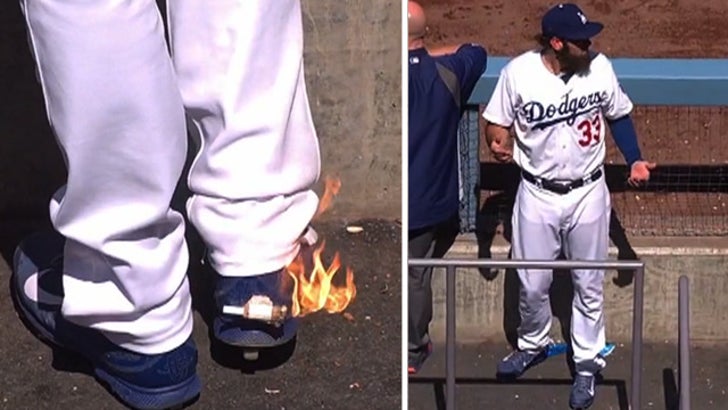 The L.A. City Fire Dept. isn't laughing at the L.A. Dodgers hot foot prank -- telling TMZ Sports playing with fire is NOT a joke ... it's dangerous.

The "hot foot" all went down at Dodgers Stadium over the weekend -- when pitcher Josh Beckett snuck a lit cigarette wrapped in matches on the back of teammate Scott Van Slyke's cleat.

The whole thing made national news -- but Captain Jaime Moore from the L.A. City Fire Dept. tells us, "These guys are supposed to be role models and playing with fire is not a joke."

Capt. Moore says the F.D. is more than happy to offer a stop, drop and roll course to the team ... in case it ever happens again.

We also spoke with Tom Olshanski -- the Director of External Affairs for the United States Fire Administration (a division of FEMA) who tells us, "We work tirelessly to warn people of the dangers of fire and to see it celebrated by professional athletes, on TV and in front of kids, is frustrating."

He adds, "Any sort of fire play like that is incredibly dangerous. Look at the recovery from even minor burn injuries."

The lesson, he says, is the same one we were all taught as kids -- "'Don't play with matches."

We reached out to the Dodgers and the MLB -- so far, no comment from either one.