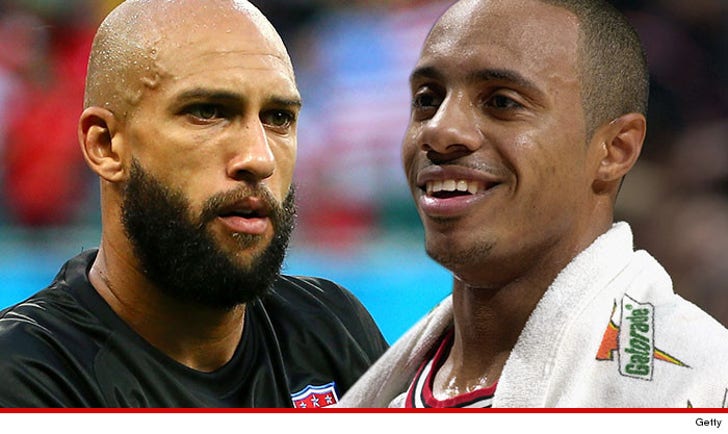 Before he became a soccer legend, Team USA goalie Tim Howard was a high school basketball phenom -- who "smothered" Jay Williams in a County Championship game ... TMZ Sports has learned.

We spoke with Tim's former hoops coach Ed Breheney -- who ran the basketball program at North Brunswick Township High School in New Jersey -- who tells us Howard was a baller.

"Timmy was the greatest defensive [basketball] player that I've ever seen," Breheney said.

"Tim had several D1 offers ... but at that time he'd already committed to U.S. soccer. I think he disappointed a lot of college basketball coaches."

Breheney notes, "He would always use the term 'represent' -- he'd tell the team, 'let's represent our school.' Back then he was doing it for North Brunswick. It's the same thing now, except a little bigger. He's representing the United States."

"Tim covered Jason Williams in the [county championship] game and he played smothering defense on him."

Of course, Williams went on to play for Duke and was later drafted by the Chicago Bulls.

Breheney says he's proud of Tim -- but not surprised ... telling us the guy has always had what it takes to be a superstar athlete.