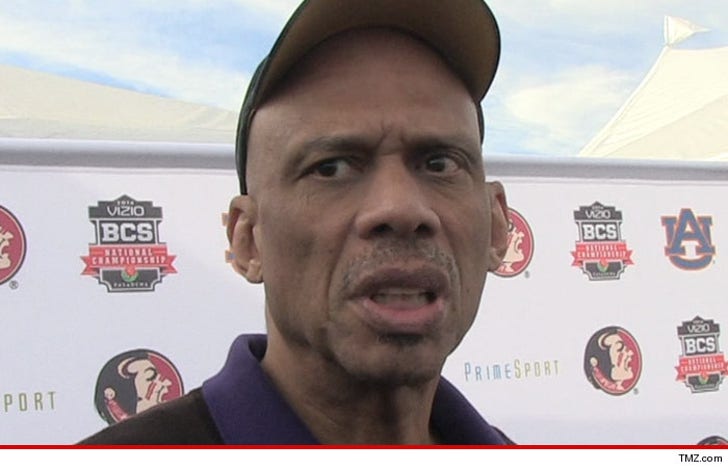 Kareem Abdul-Jabbar is pissed ... claiming in a lawsuit that a famous Beverly Hills auction house has 152 pieces of his treasured memorabilia ... including a Bruce Lee poster ... and they refuse to give it back.

Long story short ... Kareem claims he got into business with Julien's back in 2012 -- initially agreeing to let them sell 400 items ... but the deal went south when Kareem didn't want to part with certain things that had sentimental value.

A legal war ensued -- and Kareem's LLC admits Julien's was awarded monetary damages -- but claims the auction house is holding his property "hostage" until they get paid.

The items involved are from several periods in Kareem's life ... including:

-- An engraved KAJ tea set
-- A McDonald's "Top Faces of Black History" Award
-- Signed "Game of Death" poster (the movie he did with Bruce Lee)
-- A Stetson black suede hat
-- 5 pairs of Lakers sweatpants
-- Personalized L.A. Kings jersey
-- A "Fletch" script from 1984
-- A custom made rocking chair
... and a special Kareem Abdul-Jabbar snowboard

7:45 PM PT -- We spoke to lawyers for the auction house who told us, "The claim that these items are being held hostage is absolutely false."

They explain, "Julien’s Auctions recently prevailed in an arbitration against one of Mr. Jabbar’s companies, KAJ Lifetime Retirement Collection LLC. That company, not Mr. Jabbar, entered into a valid consignment agreement for the items at issue."