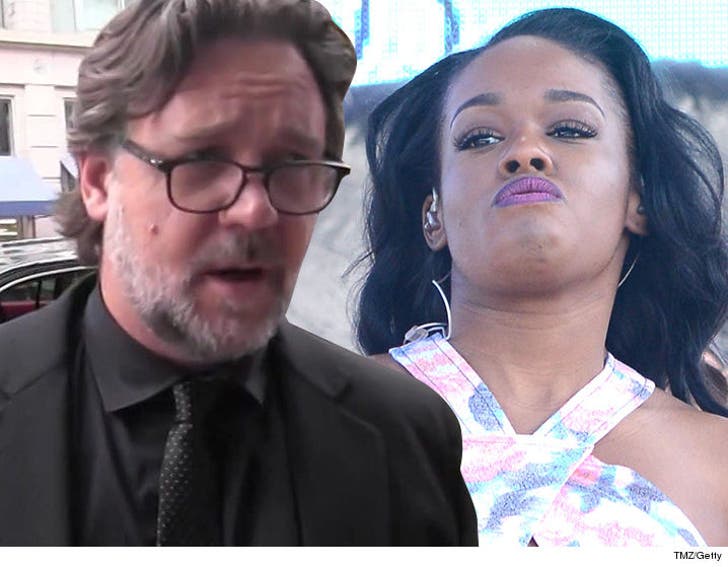 Russell Crowe bounced rapper Azealia Banks out of his hotel suite when she turned into the "plus one" from hell and threatened to cut his guests and watch them bleed ... according to multiple witnesses.

The bizarre incident went down Saturday night at Russell's room at a Bev Hills hotel, where he'd invited about 10 people over to have dinner and listen to music. One of his guests was RZA, who brought Azealia along.

According to eyewitness accounts the trouble started when Azealia laughed out loud at Russell's music selection, and then called him and at least one other guest, "boring white men." We're told a female guest jumped to Russell's defense and suggested Banks pipe down.

Instead, we're told she made an insane speech/threat to Crowe and the woman ..."You would love it if I broke my glass, stabbed you guys in the throat, and blood would squirt everywhere like some real Tarantino s***." Then for good measure, witnesses say she dropped a few n-bombs ... yet Crowe remained surprisingly calm.

We're told Azealia reached for her glass, cocked it back ... and that's when Russell had enough -- he grabbed her in a bear hug and carried her out of the suite. He then called hotel security guards who removed Azealia from the grounds.

Azealia posted a different version of events, claiming Crowe called her the n-word, choked her, threw her out and spit on her.

We're told at least 4 of the guests/witnesses gave statements during the investigation, and all 4 used the word "erratic" to describe Azealia's behavior. For the record, we're told ... even RZA says she used the n-word, not Russell.