Meryl Streep took another shot at Donald Trump in a new speech defending LGBT rights ... and added a new title to her "over-rated" stature.

Meryl delivered the anti-Trump remarks Saturday night in NYC at a gala for the Human Rights Campaign while receiving their National Ally for Equality Award.

You'll recall ... she also dissed Trump during her acceptance speech at the Golden Globes in January, after which Trump called her "the most over-rated actresses in Hollywood" and a "Hillary flunky."

Seems like Meryl's restarting the fire. Your move, Mr. President. 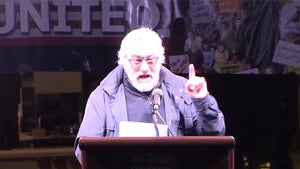