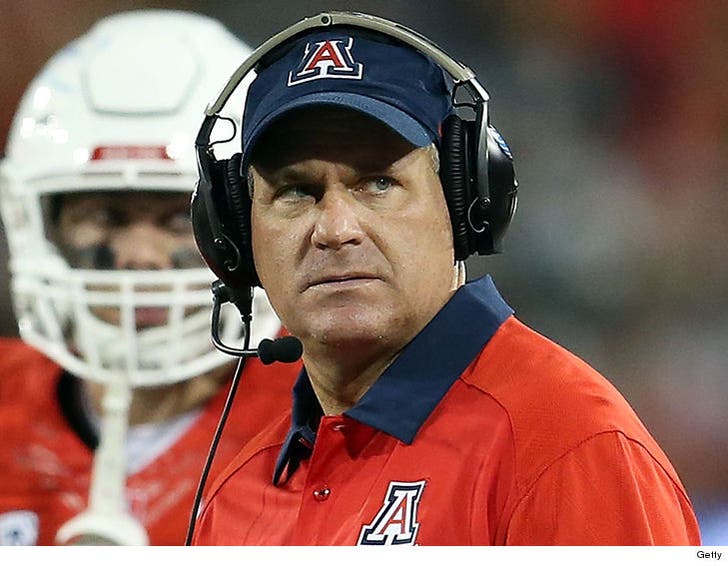 Bombshell after bombshell out of Tucson, Arizona Tuesday night ... where Rich Rodriguez was fired as the head football coach -- and moments later, he put out a statement denying he sexually harassed his former assistant.

But in the statement, RichRod says one claim against him is true -- he cheated on his wife.

"I was deeply disappointed to learn by email this evening that the University of Arizona is buying out my contract," Rodriguez said in a statement.

"This action comes on the heels of an outside investigation by the University into alleged workplace misconduct. This investigation concerned a complaint by my former administrative assistant, who threatened a $7.5 million lawsuit alleging harassment."

"The University initiated a thorough outside investigation. I fully cooperated with the investigation, including voluntarily taking and passing a polygraph. The University determined that there was no truth to her accusations and found me innocent of wrongdoing."

Then Rodriguez addressed the adultery ...

"Regrettably, the complaint included a single truth -- in the past, I had a consensual extramarital affair with a woman who is not affiliated with the University. It was wrong, and I have apologized to my wife and family."

"I am still working incredibly hard to repair the bonds I've broken and regain the trust of my wife and children, whom I love dearly."

"I am not a perfect man, but the claims by my former assistant are simply not true and her demands for a financial settlement are outrageous. I am saddened that these accusations and investigation have caused my family additional stress."

He adds, "I will vigorously fight these fabricated and groundless claims."

Rodriguez will reportedly receive a $6 million buyout from the University.

Rich's former assistant essentially claims the coach ordered her cover up his affair -- which included lying to his wife about his whereabouts, this according to the Arizona Daily Star.

The woman claims she was so stressed out about the situation, she suffered migraine headaches and she plans to file a lawsuit in the very near future.