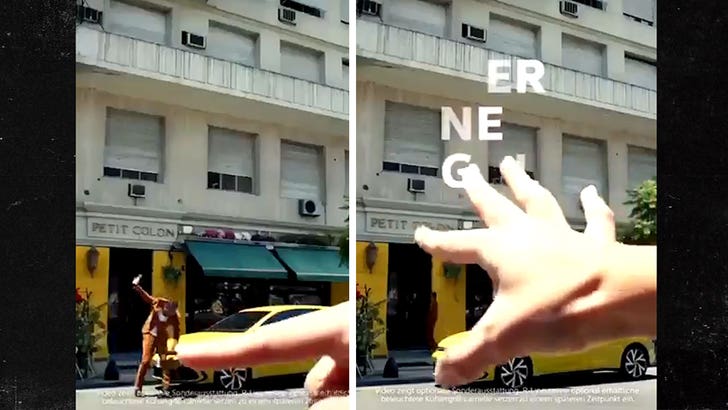 A bizarre, racist video promoting Volkswagen's new Golf 8 made its way to the company's Instagram page ... so the German car company's saying sorry for what it calls an "insult to every decent person."

The ad -- which has been pulled, but not before spreading and being slammed on social media -- shows a black man being forced away from a parked VW by an oversized white hand ... before he gets flicked into a restaurant called Petit Colon.

That translates from French to the Little Colonist or Little Settler. It's also been pointed out as letters resolve on screen, at one point, they spell out a German word often used as a slur against black people. So yeah ... pretty freakin' racist.

A couple of company honchos -- head of sales and marketing Jürgen Stackmann and group head of diversity Elke Heitmüllerare -- are now on the apology tour. They acknowledge the racist content and say ... "We understand the public outrage at this. Because we're horrified, too."

They add ... "On behalf of Volkswagen AG, we apologize to the public at large for this film. And we apologize in particular to those who feel personally hurt by the racist content because of their own history."

Speaking of history, VW's isn't great when it comes to racism ... despite being the world's biggest automaker. In light of that, Stackmann and Heitmüllerare say ... "We're ashamed of [the ad] and cannot explain how it came about. All the more reason for us to make sure we clear this up."

In a separate statement, Volkswagen says "it does not tolerate any form of racism, xenophobia or discrimination."