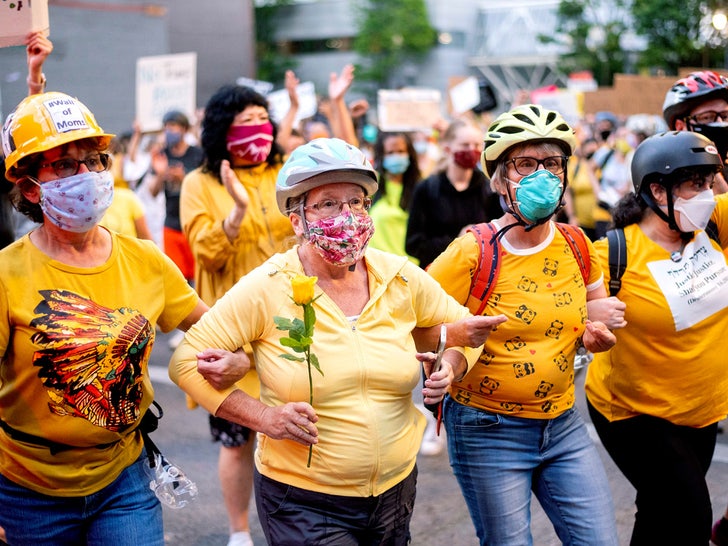 A sea of moms protesting police misconduct and racial inequality in Portland came up with a remix of sorts ... a lullaby singing "Hands up, don't shoot."

Hundreds, if not thousands, of moms, took to the streets Monday night and sang the lullaby in unison. Nearly 100 mothers as part of the "Wall of Moms" also stood outside a federal courthouse, locked arms and formed a human shield to protect protesters from federal officers. They also chanted, "Moms are here! Feds stay clear!"

Love all these mom protestors in Portland. Lullaby singing “Hands up don’t shoot me” was not on my 2020 bingo card. pic.twitter.com/vBMV6PrRFw

If you've been living under a rock ... Portland's been the site of protests for more than 50 days now. The protests have mostly been peaceful but there have been instances of vandalism and violence ... triggering the feds to send federal agents into the City of Roses to restore order.

Problem is ... scores of federal agents showed up wearing masks, camouflage and showing ZERO identification badges while arresting protesters and hauling them away in unmarked vehicles. Videos on social media of theses arrests sparked outrage in the city ... prompting the "Wall of Moms" to get involved.

Even though state officials want the feds to bounce, it appears the feds are only going to ramp things up. The Trump administration's reportedly planning to do the same across other cities in America ... including Chicago.