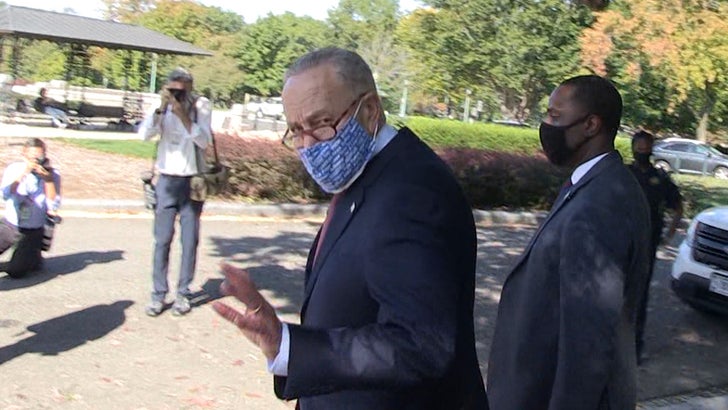 Sen. Chuck Schumer is weighing in on an odd fact about most polling places in America -- where you cannot wear clothing with a candidate's face or name, but CAN carry a firearm.

The Senate Minority Leader was heading to his ride Thursday on Capitol Hill when we asked him about the rule banning voters from wearing t-shirts or caps hyping their candidate when they go to cast their vote.

In theory, it's about not coercing others to vote for your candidate ... but when we asked Sen. Schumer he seems to think t-shirts are harmless when it comes to the election process.

On the other voter intimidation hand ... there are guns. You might be surprised to know it's perfectly legal to bring your legally registered firearm to the polls. According to the L.A. Times, only a dozen states have banned guns where you vote.

We raised that with Schumer too, and again ... he answered quickly, but much differently from the t-shirt question.

If you're curious ... California, Florida, Arizona and Georgia are among the states that have outlawed guns at voting sites.

In Michigan, an open-carry state, they've enacted a temporary ban on firearms at polling places. Remember, we've already seen citizens armed to the teeth this year in Michigan's Capitol during protests ... not to mention the foiled plot to kidnap Gov. Meg Whitmer.

Even if you do live in an open-carry state it's not a guarantee guns are okay when you cast your ballot ... especially if you're voting somewhere like a school.

As they say, check your local laws.