The fan who jumped over the stadium railing in an attempt to catch Aaron Judge's 62nd home run ball somehow avoided injury ... but he did get some bad news following the fall -- he was immediately booted from the stadium.

The guy left his seat and jumped several feet onto a concourse below in an effort to land the historic baseball in the first inning of NY's game against the Rangers in Texas ... but he came up empty -- as the Yankees slugger's historic blast ultimately landed into a man's mitt in the first row.

A FAN JUMPED OFF THE RAILINGS TO TRY AND GET THE BALL IF IT FELL ON AARON JUDGE’S 62ND HOME RUN 😂😂😂😂 #YANKEES #AARONJUDGE pic.twitter.com/0fKYuIhVNq

TMZ Sports has learned ... the guy apparently avoided broken bones in the jump -- although he didn't necessarily escape unscathed, 'cause cops tell us he was met by security guards who tossed him from the venue.

We're told the Rangers did have an opportunity to press charges against the guy and/or issue him a criminal trespass warning -- but they declined, so cops let him go without further incident.

As we reported, Cory Youmans -- a finance worker in Dallas -- was the one who caught the ball ... which, according to SCP Auctions' David Kohler, is worth $2 MILLION.

Youmans told reporters at the stadium he wasn't sure what he was going to do with it.

Judge, meanwhile, said after the game he'd love to have it back. 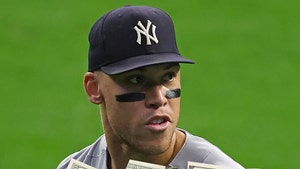 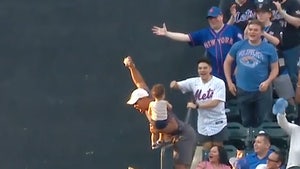