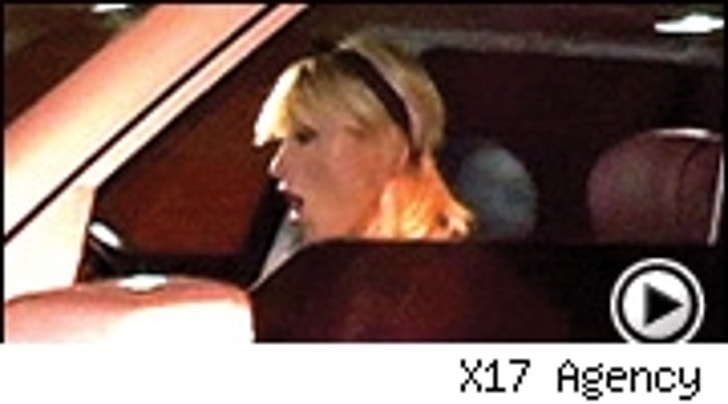 Paris Hilton hit a parked car causing damage, then left without leaving a note -- allegedly a violation of California law, and it's all on video.

Hilton checks her mirrors and looks around, but apparently doesn't notice the parked Honda Civic behind her and slams into the bumper, causing damage to both vehicles.

Hilton then exits the public parking structure without leaving a note with her contact information, which is a misdemeanor under California law, punishable by as much as six months in jail.

This latest incident is just another in a series of Hilton-related car mishaps.

Last November the hotel heiress was involved in yet another hit and run, which TMZ caught on tape, when her then boyfriend Stavros Niarchos crashed Hilton's Bentley into a parked truck and then drove off. Additionally, TMZ has video of eight instances, since May 1, where Hilton drives away in her car sans seat belt. While as far as we can determine, she has never been cited. If she had, the fines would total $1682. BTW, Thursday's incident brings the count (of driving without a seat belt) to nine.

TMZ checked official parking records in LA and Beverly Hills and found since January, Hilton has been cited 6 times for various violations.

Paris' rep Elliot Mintz tells TMZ that Paris called him about the parking garage incident after it happened Thursday. Mintz says Paris was aware that she backed into another vehicle, and there were obviously no injuries and only minor damage to both vehicles. Mintz says Paris left her contact information with a "parking attendant at the parking garage" to give to the person who is the registered owner of the vehicle that was hit. Mintz says to accuse Paris of leaving the scene without leaving her contact information or a note is inaccurate.

As for the seat belt, Mintz says it's impossible to know whether or not a block away she does put her seat belt on. "When she is exiting a building and there are photographers all over her, that is not her first concern," he says. According to Mintz, as a routine habit, Paris DOES wear a seat belt when she's driving.

And what about that infamous Bentley hit and run? Mintz says "For the record, Paris was not driving the vehicle that evening. The person who was driving the vehicle resolved that issue with the owner of the truck. To the best of my knowledge, there was a police inquiry about the incident and it was resolved by the LAPD. To suggest that Paris was involved in a hit and run is completely inaccurate. She wasn't behind the wheel."