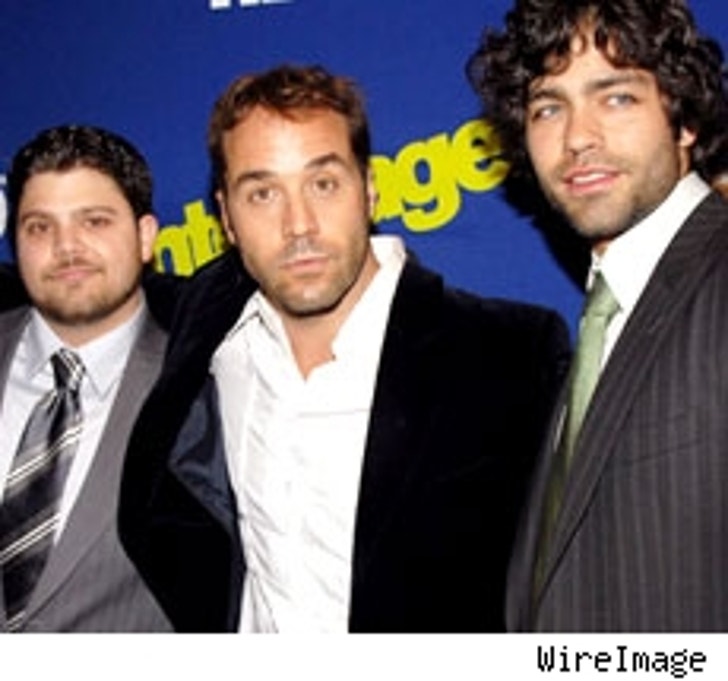 Last night's "Entourage" was less about Hollywood than it was about homes – the arrival of the guys' ex-con buddy Dom from back home and the introduction of a young punk actor into Ari's home – and to his little girl. Still, we couldn't help but wonder about the luscious-looking celebration dinner, that familiar-looking paparazzo that Dom man-handles and an "Aquaman" ride that didn't appear to involve any water.

ART: Ari takes the boys out to a swanky steak dinner to fete "Aquaman"'s sinking "Spider-Man" with the top-grossing weekend ever. He chides Eric for ordering "three different kinds of caviar" and Drama appears to be loving a fabulous tower of raw seafood delights. Where does Team Chase go for this special occasion and how much is it going to set Ari back?

LIFE: Ari better hope his Black Am Ex is all paid up, because Mastro's Steakhouse, the cozy Rat Pack-y enclave in the heart of Beverly Hills (just up a block on Canon Drive from Wolfgang Puck's Spago), ain't cheap. The seafood tower, which patrons can assemble to their specifications with all manner of fresh lobster, crab, and oysters, typically runs $35 per person. A 33-ounce ribeye like the one Drama takes home in the doggie bag, is $44.50. And, as for the caviar, well, Eric certainly has raised his taste from those days at Sbarro: it's $100 per ounce.

ART: Before the gang gets on the "Aquaman" ride, Vince's rambunctious pal Dom violently grabs a camera out of the hands of a lensman whom Vince then placates and calls something like "E.L." How does Vince know who he is and, more important, why is he so nice to him?

LIFE: Beats us. The burly, bearded photog is none other than E.L. Woody, the self-proclaimed "King of the Paparazzi" and one of Hollywood's most notorious celeb-snappers. And as regular visitors to TMZ will attest, relations between stars and shooters are hardly amicable, though there is the occasional--very occasional--detente.

ART: Ari says that "Aquaman: The Ride" is "water-themed" but the fellas seem to stay pretty dry during their maiden voyage. (He also says that he hasn't been on a thrill ride since he, um, had a dalliance with "one of the partner's daughters in the William Morris mailroom," but we'll leave that one alone.) Where did they get such a big ride on which to shoot, and does it actually involve a "ten-foot flume of water," as Vinny hopes?

LIFE: According to HBO, the ride in the show is the Goliath at Six Flags Magic Mountain in Valencia, Calif., which has one of the deepest drops of any roller coaster in the world and which goes 85 mph, explaining Jeremy Piven's brilliant half-orgasmic, half-passed-out expression as the ride hits top speed. And no, it's just a roller coaster -- no water anywhere near it.