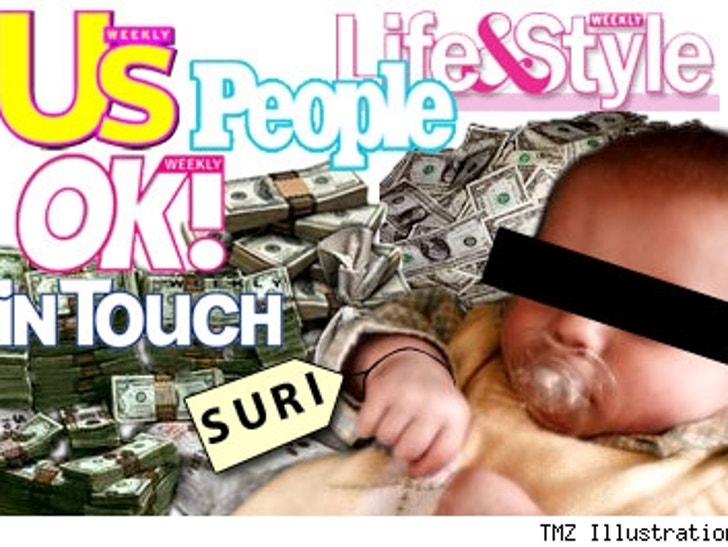 TMZ has contacted the big players in the bidding wars over celebrity baby photos, and you may be surprised at what a picture of Suri Cruise can fetch. 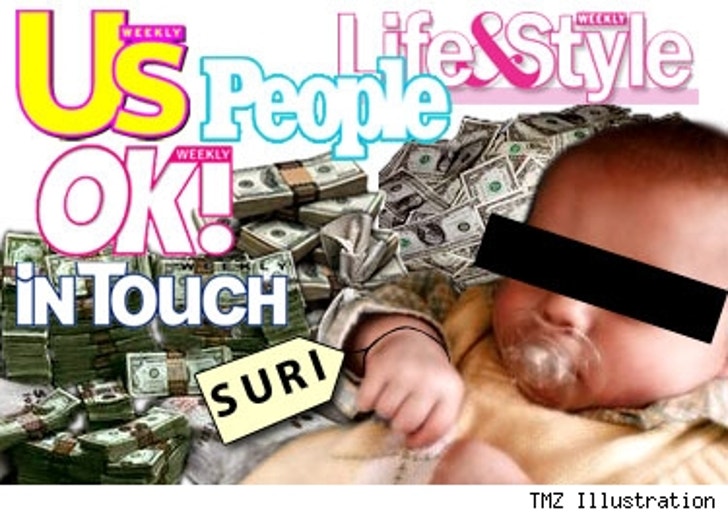 Editorial staffers from People, Us Weekly, In Touch, Life and Style and OK! spoke candidly with TMZ, on condition that no names be used.

A source at OK! magazine tells TMZ that a set of exclusive, posed photos of the nearly three-month-old Suri would go for anywhere between 4 and $5 million -- People reportedly paid $4.1 million for pictures of Shiloh Jolie-Pitt. The OK! source believes the high price tag is justified, partly because there would be a huge spike in circulation but also because of "the cred" that a glossy would get by having the photos plastered all over the world.

But sources at In Touch and Life & Style magazines beg to differ. The feeling there -- that Suri's first pics would garner a relatively paltry $2 million - $3 million. One source said the concealment of Suri "stinks" of Tom trying to manipulate the situation by creating mystery and thereby driving the price up.

Over at People, a source tells TMZ that the photos would fetch less than Shiloh's. The source says the main draw is not the baby or Tom but Suri's mom -- "People are fascinated by Katie Holmes, who's leading such a weird life now," transforming from an apple-cheeked All-American girl into the Bride of Scientology.

An Us Weekly source also believes that Suri photos would be a less valuable commodity than Shiloh pics. The thinking -- Brad and Angelina were "beautiful and romantic" after their baby was born. The source says the value in Suri pics have more to do with the "freak factor" of her parents.

And there's this -- One editor told TMZ that the price of the photographs would depend in no small part on where the proceeds from the sale end up, implying that it would be a very different matter if the millions went to African orphans than straight into the coffers of the Church of Scientology.

But what if the first Suri pics were not posed but captured by a paparazzo? A source at Splash News, a photo agency, thinks the shot would be "the biggest picture by a long mile in the world, and that as time goes on, it will only get more valuable. " The source says one good shot could fetch up to $2 million.