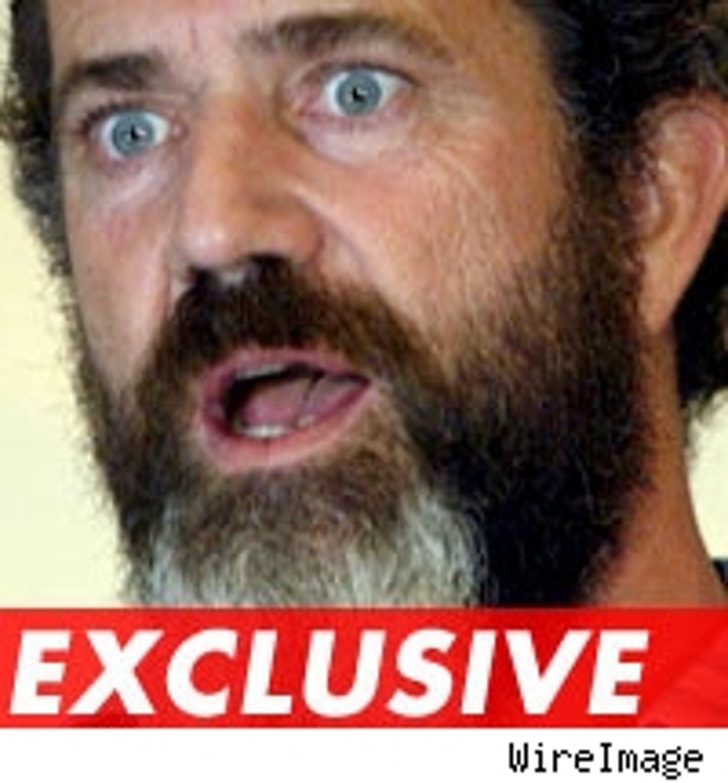 TMZ has learned that Mel Gibson went on a rampage when he was arrested Friday on suspicion of drunk driving, hurling religious epithets. TMZ has also learned that the Los Angeles County Sheriff's department had the initial report doctored to keep the real story under wraps.

TMZ has four pages of the original report prepared by the arresting officer in the case, L.A. County Sheriff's Deputy James Mee. According to the report, Gibson became agitated after he was stopped on Pacific Coast Highway and told he was to be detained for drunk driving Friday morning in Malibu. The actor began swearing uncontrollably. Gibson repeatedly said, "My life is f****d." Law enforcement sources say the deputy, worried that Gibson might become violent, told the actor that he was supposed to cuff him but would not, as long as Gibson cooperated. As the two stood next to the hood of the patrol car, the deputy asked Gibson to get inside. Deputy Mee then walked over to the passenger door and opened it. The report says Gibson then said, "I'm not going to get in your car," and bolted to his car. The deputy quickly subdued Gibson, cuffed him and put him inside the patrol car.

TMZ has learned that Deputy Mee audiotaped the entire exchange between himself and Gibson, from the time of the traffic stop to the time Gibson was put in the patrol car, and that the tape fully corroborates the written report.

Once inside the car, a source directly connected with the case says Gibson began banging himself against the seat. The report says Gibson told the deputy, "You mother f****r. I'm going to f*** you." The report also says "Gibson almost continually [sic] threatened me saying he 'owns Malibu' and will spend all of his money to 'get even' with me."

The report says Gibson then launched into a barrage of anti-Semitic statements: "F*****g Jews... The Jews are responsible for all the wars in the world." Gibson then asked the deputy, "Are you a Jew?"

The deputy became alarmed as Gibson's tirade escalated, and called ahead for a sergeant to meet them when they arrived at the station. When they arrived, a sergeant began videotaping Gibson, who noticed the camera and then said, "What the f*** do you think you're doing?"

A law enforcement source says Gibson then noticed another female sergeant and yelled, "What do you think you're looking at, sugar tits?"

We're told Gibson took two blood alcohol tests, which were videotaped, and continued saying how "f****d" he was and how he was going to "f***" Deputy Mee.

Gibson was put in a cell with handcuffs on. He said he needed to urinate, and after a few minutes tried manipulating his hands to unzip his pants. Sources say Deputy Mee thought Gibson was going to urinate on the floor of the booking cell and asked someone to take Gibson to the bathroom.

After leaving the bathroom, Gibson then demanded to make a phone call. He was taken to a pay phone and, when he didn't get a dial tone, we're told Gibson threw the receiver against the phone. Deputy Mee then warned Gibson that if he damaged the phone he could be charged with felony vandalism. We're told Gibson was then asked, and refused, to sign the necessary paperwork and was thrown in a detox cell.

Deputy Mee then wrote an eight-page report detailing Gibson's rampage and comments. Sources say the sergeant on duty felt it was too "inflammatory." A lieutenant and captain then got involved and calls were made to Sheriff's headquarters. Sources say Mee was told Gibson's comments would incite a lot of "Jewish hatred," that the situation in Israel was "way too inflammatory." It was mentioned several times that Gibson, who wrote, directed, and produced 2004's "The Passion of the Christ," had incited "anti-Jewish sentiment" and "For a drunk driving arrest, is this really worth all that?"

We're told Deputy Mee was then ordered to write another report, leaving out the incendiary comments and conduct. Sources say Deputy Mee was told the sanitized report would eventually end up in the media and that he could write a supplemental report that contained the redacted information -- a report that would be locked in the watch commander's safe.

Initially, a Sheriff's official told TMZ the arrest occurred "without incident." On Friday night, Sheriff's spokesman Steve Whitmore told TMZ: "The L.A. County Sheriff's Department investigation into the arrest of Mr. Gibson on suspicion of driving under the influence will be complete and will contain every factual piece of evidence. Nothing will be sanitized. There was absolutely no favoritism shown to this suspect or any other. When this file is presented to the Los Angeles County District Attorney, it will contain everything. Nothing will be left out."

"After drinking alcohol on Thursday night, I did a number of things that were very wrong and for which I am ashamed. I drove a car when I should not have, and was stopped by the LA County Sheriffs. The arresting officer was just doing his job and I feel fortunate that I was apprehended before I caused injury to any other person. I acted like a person completely out of control when I was arrested, and said things that I do not believe to be true and which are despicable. I am deeply ashamed of everything I said. Also, I take this opportunity to apologize to the deputies involved for my belligerent behavior. They have always been there for me in my community and indeed probably saved me from myself. I disgraced myself and my family with my behavior and for that I am truly sorry. I have battled with the disease of alcoholism for all of my adult life and profoundly regret my horrific relapse. I apologize for any behavior unbecoming of me in my inebriated state and have already taken necessary steps to ensure my return to health."