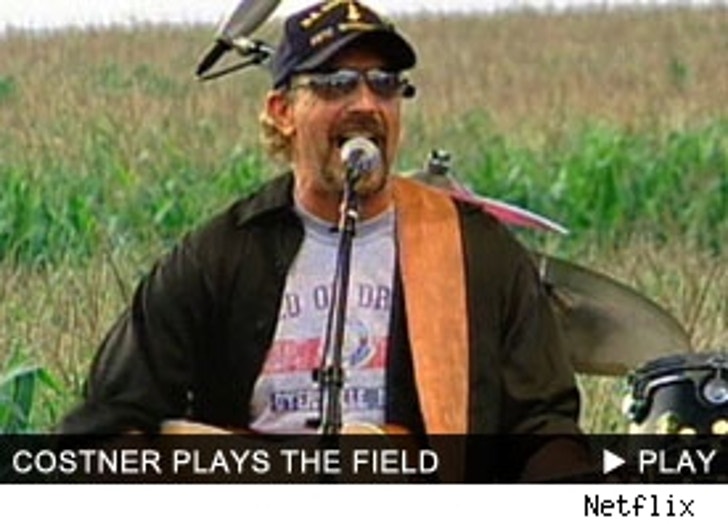 DYERSVILLE, Iowa (AP) -- The corn lining the outfield is tall again this year. The white farmhouse, wraparound porch and picket fence appear unaffected by time. The mythic baseball diamond and lush outfield look just like they did in the film made 17 years ago.

And for a few hours, hundreds of children and parents raced around the bases, played catch or hit soft pitches in the field made famous by 1989's "Field of Dreams." For 10-year-old Alexis Turner, the visit included a brush with Kevin Costner, the movie's star who returned Friday for the first time since filming ended.

Costner joined about 5,000 people who packed the field for a free screening of the movie. The event, sponsored by online DVD rental company Netflix Inc., is the fifth stop in a 10-city tour featuring classic movies at the locations they were filmed. "My dad pointed him out to me. I didn't even know I was standing next to him," said Turner, of Goshen, Ind., who fielded balls while Costner tossed pitches to one young hitter after another. "He told me to 'step back honey,' ... when one, a bigger hitter, came to bat," said Turner, in the middle of touring several major league ballparks with her father. "This is easily my most favorite part of the trip."

The film, about a farmer named Ray Kinsella who is persuaded by a mysterious voice to build a baseball field in his cornfield, is based on the W.P. Kinsella novel "Shoeless Joe." "I was only 14 when the movie came out, and it was immediately one of my favorites and still is," said Jennifer Lukenbill, who drove her husband and children eight hours from their home in Nevada, Mo., to see Costner and the movie. "I can't watch it even today without feeling the way I did the first time," she said. "It was the first time I saw my dad cry -- and the last time."

The movie turned a plot of land owned by two local farmers into a site visited by more than 65,000 people each year. Like the ball diamond, not much has changed in Dyersville since the film crew and stars like James Earl Jones, Ray Liotta and Burt Lancaster invaded this small eastern Iowa town. A new hotel has been added, the downtown has undergone a beautification and lighting project and several new companies have arrived.

The population -- 4,035 -- has increased by about 100. Tourism and agriculture are still the area's chief economic engines. "I think initially, the natives thought interest in the field as an attraction would taper off," said Dyersville Mayor Jim Heavens, who estimated more than 1 million people have visited the field in the last 17 years. "But it's been pretty steady over the years and it's one of those things that continues to make a connection with people."

Visitors on Friday got a sense of the dispute between the two families that own the land. The Lansing family, which owns the farmhouse, right field and most of the infield, elected not to take part in the event. So officials closed off their property, forcing moviegoers to plant their folding chairs in left and center field. But for many, like Dan Dunavan, a 65-year-old retiree from St. Louis, the turf tension was irrelevant. "I just wanted to come up and see this," said Dunavan. "It's a cornfield pretty much in the middle of nowhere. And everything looks the same as it did in the movie." Before the screening, Costner played a 75-minute set with his four-piece band. "I feel like I will forever be connected here to the state of Iowa," Costner told the crowd. "I've never lost my feel for what we did here. This was a perfect time for me to come back. This is our secret here tonight in the corn."