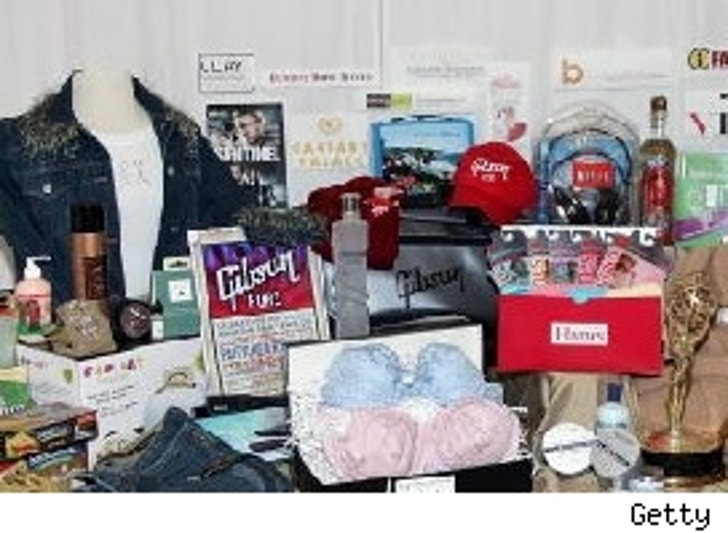 The celebrity swag haul this year at the Emmys – whether you're a winner, loser, or just a presenter – could top $100,000 per person. But with the federal government and IRS in the midst of a vigorous push to get stars and Jane Q. Citizen alike to pay taxes on gifts and winnings, it might just behoove celebs to lay off those tempting gift bags altogether and avoid the hefty 50% tax bill, not to mention the prying eyes of the taxman.

This year, the Academy of Television Arts and Sciences, the group that gives out the Emmys, has a bag valued at anywhere from $27,000 to $33,000 to thank the presenters in the Aug. 27 ceremony. Distinctive Assets is giving away a $42,000 trove of consolation prizes (above), including wine club and gym memberships, a VIP package at Caesar's Palace in Las Vegas, and gift certificates for life coaching, LASIK eye surgery, and something called "Fan Database Management Services" – and that's for the losers. And GBK Productions is setting up a gift "suite" for nominees and special guests that features a gold-plated Nokia cell phone and a lease on a Ford hybrid car -- $50,000 worth, all told.

Sounds pretty good to us. And yet, Paul Caron, a tax law professor at the University of Cincinnati law school and creator of the blog TaxProf, tells TMZ that given their income bracket, stars could end up paying half the value of the gift bag just in taxes-and that more than ever before, the IRS will be watching very closely.

What all this swag-giving and -gathering amounts to, admits Distinctive Assets president and gifting guru Lash Fary, is stars getting a discount -- a hefty one -- on some nice stuff. "I think paying 40 cents on the dollar for this merchandise is a pretty good deal," says Fary. Not that most of these stars – who make as much as $20 million per year – are that worried, he says: "I honestly think that Jennifer Garner has bigger tax issues than her $30,000 gift bag."

Still, Fary says that he's trying to effect change in the relevant tax codes for such giving, because he doesn't think it makes sense that a celebrity who's had LASIK eye surgery, for instance, courtesy of a gift bag from a year ago, should have to pay taxes on a non-transferable gift certificate for LASIK eye surgery that he or she gets in this year's Emmy haul. "There needs to be a legal loophole," says Fary. "It's silly and preposterous."

And yet, as Professor Caron points out, it's loopholes and a fair amount of hush-hush that's forced the IRS to get tough on gift-takers and prizewinners in recent years, making high-profile examples out of "Survivor" winner Richard Hatch, some of the families of "Extreme Makeover: Home Edition," those Pontiac G6 winners on "Oprah" -- and now, gift bags. Caron thinks that what the gift-givers might end up having to do, if the tax burden and IRS vigilance gets too onerous, is just include a check for the tax to help keep celebs happy – the cost of giving stuff away, as it were. (George Clooney gave his 2006 Oscar basket -- worth a reported $100,000 -- to charity, a cost-free option for celebs.)

Of course, as Caron puts it, there's a couple groups of people that benefit regardless of what celebs decide to do with their swag. "The accountants and the lawyers end up coming out ahead in the end," he says. "They get the biggest bag of all."