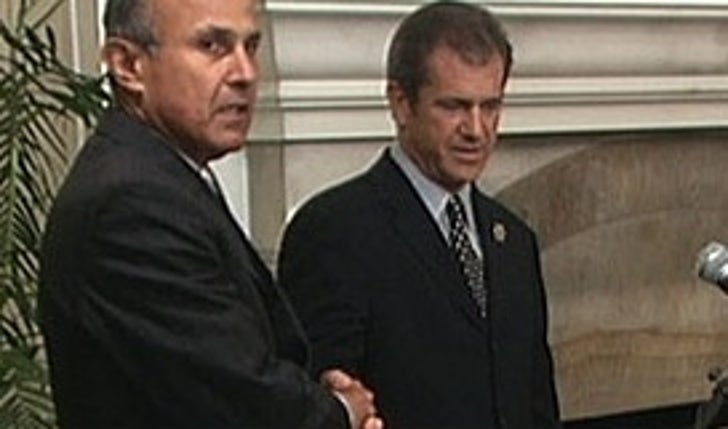 This past Friday afternoon, I landed in Los Angeles after taping my "People's Court" segments in New York. I checked my voice mail at work as we taxied to the gate and the first message was from an L.A. County Sheriff's sergeant. He wanted to talk to me about the Mel Gibson case.

I sort of knew why he was calling. The Department is obsessed with finding out who gave me the arrest report in the Gibson case. I've made it clear that I will not tell them and, besides, the law is on my side. Nevertheless, I wanted to play it out so I called him back. He was nice enough, telling me he was in charge of the "criminal investigation" into the leak and wanted to know if the rumors were true that I paid someone off for the documents. I told him I would not tell him anything about how I got the report, but I did mention that I have said on TV several times that we absolutely did not pay anyone for the documents. He thanked me, saying that I answered 80% of his questions, and that was the end of it.

Do you think the Sheriff's Department might also spend a little time figuring out why officials blatantly tried to cover-up the incident by repeatedly lying to the public the day of the arrest? Please understand, this is not about Mel Gibson. Frankly, I think given what went down, his punishment was far more severe than any other drunk driver in 2006. I can't think of anyone who was put under as much scrutiny after a DUI. This is not about Mel. It's about how arrogant the Sheriff's Department is and how officials clearly feel empowered to violate the public's trust again.

I think I've finally figured out the Sheriff's shenanigans the day of Gibson's arrest. As we reported, the Sheriff sanitized the arrest report and took out all references to Gibson's attempted escape, his anti-Semitic remarks and his bad behavior. It was done at the behest of the brass in the Sheriff's Department, and, even though he denies it, I'm told Sheriff Baca was involved in the decision. So officials told me and the rest of the media the day of the arrest that it occurred "without incident." A lie. I was told by a Sheriff's spokesperson that my information about what really went down was false. Another lie.

At the time, I felt the Sheriff, who is quite friendly with Gibson, didn't want to expose what happened on his watch, so he would arrange it so that if it came out, it would be the District Attorney's responsibility. Now I realize how dense I was -- I was totally off base. The Sheriff knew this case was going to be plea-bargained. No way would it ever go to trial. If it was plea-bargained -- as it was -- the arrest report and the incendiary video of Gibson at the station would never be admitted into evidence. It would be part of the Sheriff's investigatory file and as such protected from disclosure. In other words, Sheriff's officials clearly felt the public would never know what really happened with Mel and that they could lie and get away with it. Clearly, they didn't count on me getting the arrest report. That busted them big time. And now other lawyers have told me they've seen this happen before with other celebs.

So the Sheriff's Department is investigating why they got busted, not the corrupt process that officials sanctioned. And an "independent" commission is now investigating whether the Sheriff followed proper procedure. Well, let me tell you something about this commission. Three days after the arrest, I called the head of the commission twice -- you would think I'd get a call back if he were serious about getting to the truth. I'm still waiting, but I'm not holding my breath.

Don't get me wrong. This is not a slam on the rank-and-file in the Sheriff's Department. This is about the officials who feel they have a right to pick and choose who gets special treatment. Of course, they will do it again, and again. It's the way it works in L.A. It's just another example of "Celebrity Justice" in Tinseltown.