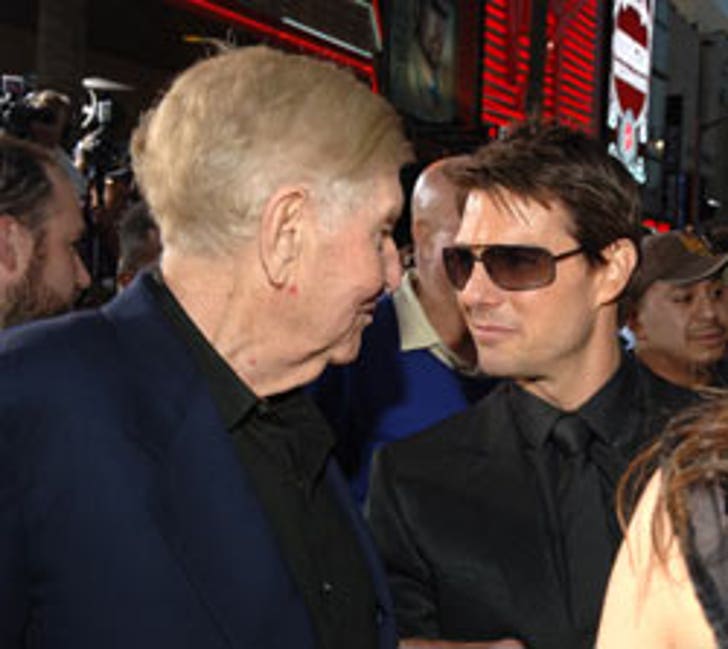 It was the war that happened literally overnight. One day, a tense but peaceful border. The next day, an exchange of rocket attacks.

For month, as we mentioned already in this column last night, the talk at Paramount had been about terminating Tom Cruise's expensive deal.

"As much as we like him personally, we thought it was wrong to renew his deal...His recent conduct has not been acceptable to Paramount."

To everyday folks, that might seem like plain-speaking of the most obvious sort. But in Hollywood, it's a nuclear warhead. Big stars might be crazy, sure, but studios and their corporate parents just don't say those sorts of things, if they plan to work with them again.

And so it begs the question: Is Redstone starting to lose it in his old age? Or did Cruise do something to enrage Redstone personally?

Deeply aggrieved, the reaction from Camp Cruise has been stunning, because typically, the Biggest Star in the World doesn't have a reaction to anything. He doesn't need to. When the world's largest talent agency wants to confirm something, it does so silently, off the record, with a sly wink and nod - not a call for blood shouted from the minarets.

But react they both have - on the record and in print.

"Outrageous and disrespectful" is how Cruise's producing partner of the last 14 years categorized the Redstone remarks in "Daily Variety." In the same story, Cruise's current agents at CAA, Kevin Huvane and Rick Nicita (Wagner's husband, FYI) decried Redstone's animadversion as "shockingly offensive," and to the "Wall Street Journal" described it as "incredibly graceless."

While it's fair to say that both sides feel offended, it would be wrong to suggest either side is really "shocked" by the unraveling of the Paramount deal. As the "Journal" notes,

"One person familiar with the situation said Paramount had not, as of Tuesday morning, informed Mr. Cruise's camp that the studio would not renew the deal. Another person familiar with the situation said Mr. Cruise's camp also had not informed Paramount that they were working on a stand-alone production deal backed by hedge funds."

In other words, no one was showing their cards, because both sides knew the other was unhappy.

It remains to be seen who the hedge fund operators are, but finding outside money to back Hollywood insiders is a rich and storied tradition, one that usually ends with the outsiders reporting hefty losses to the IRS. We can't wait to see how this deal plays out.