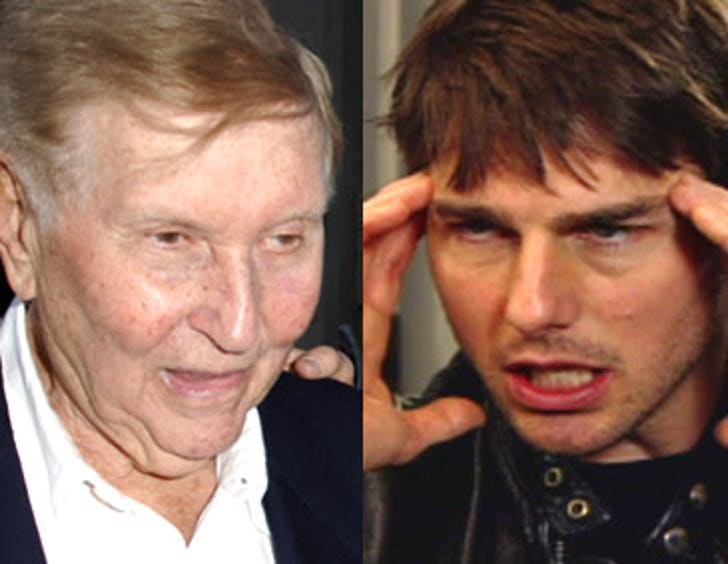 Hollywood is buzzing about Tom Cruise and the end of his relationship with Paramount Pictures -- and even more so about the verbal butt-kicking that Viacom chairman Sumner Redstone gave Cruise on his way out the door. So what ticked Redstone off so much?

"Sumner used to wear the same pair of movie-theater-usher pants..."

TMZ spoke to eight Viacom insiders, spread diversely across the media giant's numerous divisions, including the television networks and business affairs. The consensus was a bit surprising -- that Redstone is as nutty as Cruise, and the combo was bound to blow.

One well-placed source said that Cruise, who demanded a huge percentage of gross profits off the top of all his movies, was simply too rich for Redstone's cheap blood. The source mused that "Sumner used to wear the same pair of movie-theater-usher pants -- you know, the ones with the stripe down the side -- day after day with an unmatched suit jacket."

Several other sources attributed Redstone's anger to his native personality. "He has this whole old-fashioned, New England thing and doesn't suffer fools, especially creative ones, lightly," says one source who has worked with Redstone. "It doesn't take much to get him angry and he's probably been keeping this bottled up." Once he got wind that Cruise was trying to raise funds, says the source, Redstone decided to lash out.

Still another source says that Redstone was trying to make an example out of Cruise. Specifically, you don't "screw" with The Man. Cruise and his producing partner, Paula Wagner, say they were the ones to shut down negotiations with Paramount, after a chance of a deal seemed futile.

Virtually everyone we spoke with agreed -- Cruise's departure is a good thing for morale at Viacom. As one source said, as they were suffering "budget-cutting indignities," Cruise was living high on the hog. Now Cruise has been sent out to pasture, or, if you will Green Acres.