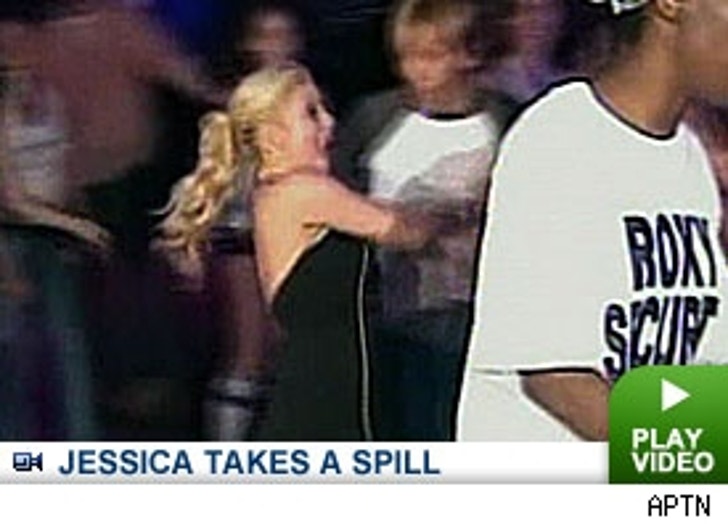 Despite losing her voice to "a strain, a bruise on her vocal chord," Jessica Simpson was in good spirits last night as she celebrated the release of her new album, "A Public Affair."

The blonde Texan hosted a roller skating party thrown by Yahoo! at tacky disco haven The Roxy in New York City. While Simpson donned her skates for a few laps around the rink (albeit poorly), she was unable to perform any songs from the album. "My voice is completely gone. The album is all part of who I am right now," a hoarse Jessica told reporters. "I wish I could sing it for them right now, but there's no way."

The pop-princess canceled her appearance on "The Late Show with David Letterman" yesterday, but she did stop by "TRL" to promote the album for her faithful MTV audience. Jessica also promised to make an appearance on the ever-important red carpet at tomorrow night's Video Music Awards.

Though she was instructed not to talk until her voice was healed, Papa Joe Simpson explained why she tried her luck, saying, "We've done the best we could to sit on her and say don't talk and be still, and you know, let time pass. This is her moment. This record is from her heart -- it's something she wants to share with her fans. This is her moment for her to be excited."