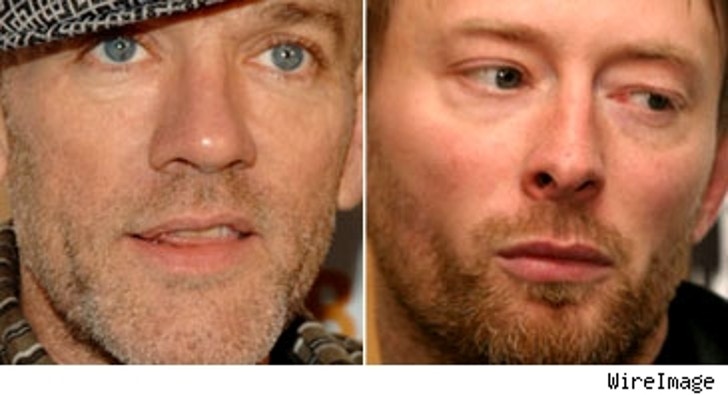 Radiohead is considered by many to be the "best" band in the world. They obviously don't write "pop" songs, so when people say "best" in this context they are talking about pure talent and musical ability. Beyond creating some luminous soundscapes, Radiohead takes on some weighty issues on and off stage. And, because they rarely get caught "with their pants down" and avoid drugs and high profile romances other "rock stars" indulge themselves with, the guys, particularly frontman Thom Yorke have a bit of a reputation for being boring or even a little depressing.

Taking a break from working on his band's next record, REM's Michael Stipes decided to speak out on Yorke's behalf to try and remedy the media's view of his pal. Says Stipe:

"Thom in person is not as cheerless as the media like to portray him. I suffered under the same weight, just because I go very solemn when I am trying to answer a question in order to articulate myself well, and my band's music leans towards the darker emotions. We have suffered the same thing for years. I'm happy to report that Mr. Thom Yorke is a very happy and very well-rounded and very smart person."

Nice work, Mike. Any good flack would be proud. If you get tired of singing, there's a career in media relations waiting for you.