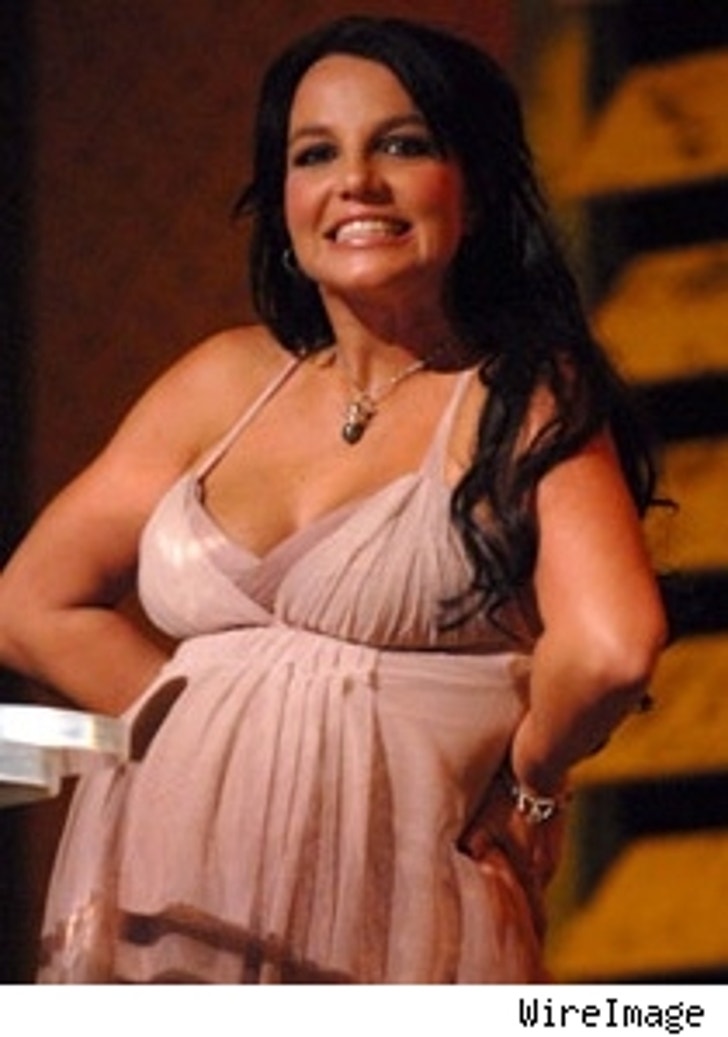 On Friday's season premiere of "Law & Order," the protagonists are an aspiring rapper and a rich young pop princess who has a reputation for being careless with her baby. Sound familiar?

The long-running police procedural is offering up a not-so-subtle simulacrum of the Spears-Federline family in the episode, though of course what actually happens to the wannabe hip-hop artist doesn't have any basis in reality -- the K-Fed-like character, J-Train, becomes the prime suspect in the killing of an NYPD detective. For the record, of course, K-Fed has never been accused or suspected of killing anyone, except perhaps his own musical career.

Elsewhere on the show, as the New York Post reports, the Britney-ish "Sky Sweet" complains in the episode about paparazzi snapping her as she loses her grip on her baby in Central Park and taking pics of the kid in her car while she goes into a coffee shop to grab a drink. And the writers of the show have seen fit to include some not-very-family-friendly rapping in the show, says the Post, as "J-Train" is depicted recording some racy rhymes before getting arrested by detectives.

Even though he won $2.5 million in a record 75 appearances on "Jeopardy," Ken Jennings hasn't even bought himself a new car. In an interview with USA Today, Jennings says he wants to avoid the possibility of becoming a sad "Where Are They Now?" story. "That would be totally ironic, right? You thought he was smart on 'Jeopardy,' but then he spent all his money on coke or hookers or whatever," explains Jennings, who's a Mormon.

The former game-show champ is hyping a new book about trivia that's coming out today, and is developing his own TV game show with the producer of "Who Wants To Be A Millionnaire" which, conceptually, is "Ken Jennings vs. the rest of the world." He'll also be on an NBC game show called "1 vs. 100" this fall to be hosted by Bob Saget, where he takes on 100 players all by himself.

Paris Not Victim of Virgin

It's been a very eventful week of nightcrawling for Paris Hilton, if you believe the hype. Various reports say that she was the victim of an elaborate prank by Virgin Airlines honcho Richard Branson, that she and her sister played mean girls to Mischa Barton at a Fashion Week party, and that she's been banned from one of Gotham's hottest new spots.

The press apparently can't get enough of the lodging heiress' nocturnal movements, whether or not they resemble the truth or not. The Daily Mail of London, for instance, reports (via MSNBC) that Paris was pranked by Branson at a party at his Oxfordshire estate last weekend, where he told Hilton that she would have the "starring role" at the Alice-in-Wonderland-themed bash, then dressed the entire 60-person waitstaff as Alice, and told guests like Princes William and Harry to order drinks from her. Very funny – except that Paris was in New York, as her rep Elliot Mintz helpfully points out.

What's more, Page Six reports today that Paris has been given the permanent 86 from Ian Schrager's Gramercy Park Hotel, because "the likes of Paris Hilton and her ilk are not welcome here." Finally, Rush & Molloy report that Paris and Nicky's favorite furry friend "Greasy Bear" Davis was complaining loudly about being at the same party as ex-girlfriend Mischa Barton Saturday night. "People were getting sick of hearing it, because he just kept repeating himself," says a R&M source. But while Mischa sniped across the room about Paris getting a Teen Vogue cover, Paris and Nicky sent daggers with their eyes across the room, and then took Brandon off into the night.

Eva Longoria says she's done with TV after "Desperate Housewives." Though she doesn't give any particular reason for her stance, and doesn't plan on leaving "Housewives," she tells the AP, "I love doing both (TV and film), but I would never do another TV show after'Desperate Housewives.' No." Her most recent film role was in the not-terribly-well-received "The Sentinel," with Michael Douglas and Kiefer Sutherland, and she'll be in "How I Met My Boyfriend's Dead Fiancee" in 2007 with Jason Biggs and Paul Rudd.

According to a source cited by Page Six, Jack Nicholson has checked into an LA-area hospital for "an infection," though no further details were available. His agent had no comment ... Christina Aguilera was replaced, reports Lloyd Grove, by Bobby Brown as the cover subject of the October issue of Vibe magazine, which made Aguilera's people fuming mad. Her power-broker manager, Irving Azoff, sent a "sabre-rattling" letter to the mag, which says that it was a regime change that caused the switch ... The ever-lovable Steve Schirripa (aka Bobby Bacala on "The Sopranos") will be hosting a late-night talk show that'll be not unlike FOX Sports' "Best Damned Sports Show," with star guests and taped man-on-the-street interviews.