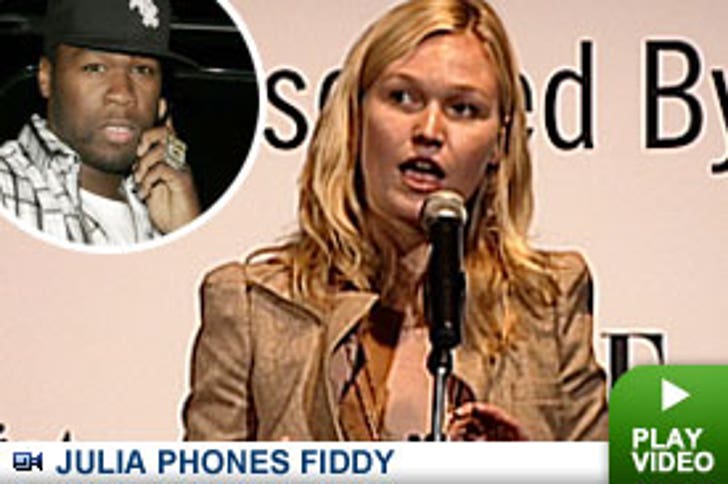 Showbiz, not unlike politics, makes strange bedfellows, like actress Julia Stiles and rap mogul 50 Cent -- at least if you're talking about the bed of a pimped-out pick-up truck with spinning rims.

At a storytelling salon presented last night by Elle magazine, Cole-Haan, and The Moth, Stiles told the simultaneously bizarre and hilarious story of being asked by Fiddy to appear on an upcoming "Pimp My Ride"-esque show he is producing for SPEED Channel. Prompted by a frantic phone call from her agent while she was on holiday, Stiles says she was asked to call the rapper -- and that she originally had pulse-quickening visions of Fiddy wanting her "to play a renegade white female rapper who lives in Detroit who is heroic...and I could actually rap in the movie!"

As it turns out, when she finally got through (and having navigated the question of how to address 50 Cent -- "Fiddy? Curtis? Boss?"), Fiddy asked her to appear on a TV show -- and offered her a pick-up truck with every blinged-out accoutrement imaginable as an enticement. The conscience-stricken Stiles, however, wanted a different kind of modification -- a hybrid engine, or at least one that used bio-diesel fuel, in her car. And, after getting this particular request, Mr. Cent never called back.