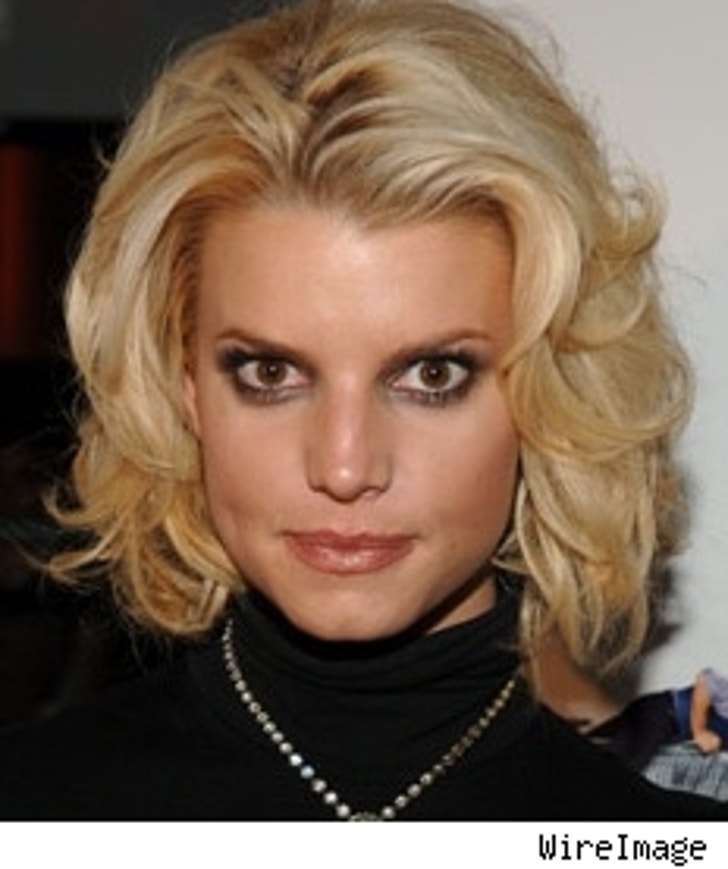 Jessica Simpson's apparently not afraid to spread the wealth – just a couple nights ago, in New York, she was spotted making cute with co-star Dane Cook at the premiere party for her latest "Employee of the Month," which opens today.

But just two nights before that, as TMZ reported exclusively, the pop princess showed up at the Four Seasons hotel in Los Angeles, and promptly disappeared into the night – or, at least, an elevator – with rocker John Mayer. As for her evening at Manhattan hotspot Tenjune with Cook, Page Six spies say that the "Employee" co-stars spent the evening "whispering into each other's ears" (of course, it's a very loud club) and that Dane "kept coming back to her every time he was pulled away." At the end of the night, however, Jess left with her real constant companion – hairdresser Ken Paves.

However the film ends up doing, Jess is just happy that she didn't have to bare her body as much as she did in last year's "Dukes of Hazzard." As she tells Lloyd Grove, "Thank God I didn't have to wear a bikini for this one and I'm just a normal, all-American, strait-laced, Midwestern girl. I need to do that for myself."

Andy Dick Thinks His Son Looks Like His Lover

Meanwhile, Andy Dick's perception of reality continues to confound – and creep us out. The comic's 18-year-old son Lucas accompanied Dick to the premiere of "Employee of the Month," and the proud papa expressed his affection for his oldest child in the oddest of ways to Lloyd Grove. "He's really great," said Dick. "Every time I go anywhere with him, I immediately say, 'This is my son,' because it looks like we're lovers because he's so handsome." (Just to set the record straight, Dick is dating a Los Angeles painter by the name of Wendy.) And Dick, ever the denizen of bizarre behavior, says that he has very little in the way of discipline to impose upon young Lucas. "I'm not going to try to control him. I can't say anything, because he's doing better than me. Who am I to slap his wrists? I learn from him."

Buffett Caught With Pills in France

Grammy winner Jimmy Buffett had a trove of pills seized from his luggage this week by French authorities when he flew into an airport there on a rented private jet. The singer was on his way to St. Tropez, and according to Page Six and local reports, was detained, but not arrested. Buffett was allowed to go free after paying a less-than-$400 fine.

A rep for Buffett says that the pills were "medicine prescribed by his doctor," (though the local press contradicts that account) and contrary to reports that there were "more than 100-plus" tabs taken from the crooner, the rep insists that the number was more like 20.

As though we didn't hear enough from Kelly Ripa about her and her husband's odd lives as soap stars every morning on "Live with Regis and Kelly," now the daytime diva is developing a sitcom for the CW network based on that very premise. Ripa and hubby Mark Consuelos met on the soap opera "All My Children," and their trials and tribulations together are constant fodder for chat and chiding by Ripa's co-host Regis Philbin. But this isn't the first time that the two will have been in a sitcom: Ripa's now-cancelled "Hope & Faith" featured Consuelos in a number of episodes.

After her big show in Philadelphia the other night, Barbra Streisand (or at least someone at her hotel suite) decided to indulge in what Rush & Molloy term "a lot" of cheese-steak sandwiches at about 2 a.m. No word if Rosie O'Donnell, who made the trek down to see her favorite diva, was chowing as well ... ABC's "Lost" made its long-awaited season premiere, and even though it killed its competition in its 9 p.m. timeslot with 18.82 million viewers, its ratings still lagged 25% behind its season premiere last year, says Variety ... Regal Entertainment Group, the largest US movie theater chain, won't be showing the controversial fake-documentary "Death of a President," which features a staged assassination of President Bush, because of its subject matter, says the Hollywood Reporter.