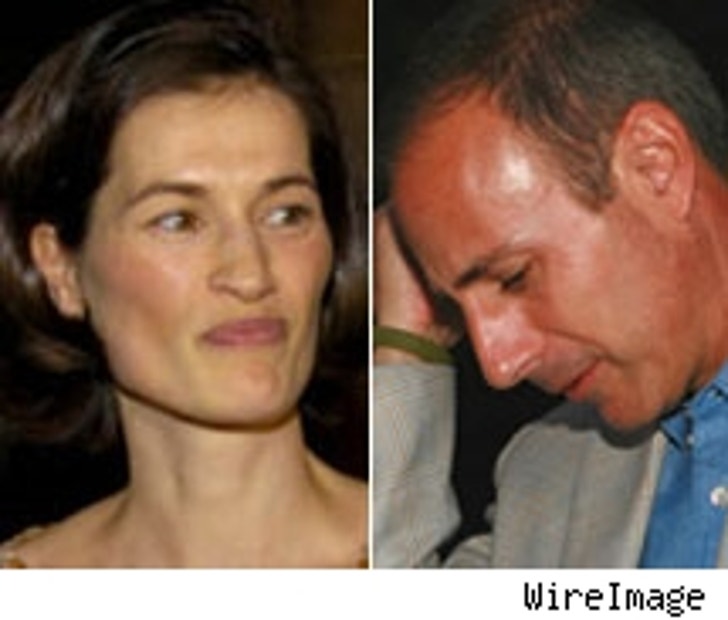 NBC is extremely concerned over reports that Matt Lauer's wife filed for legal separation, and the network is doing everything in its power to stop the story from spreading.

Annette Roque Lauer, who married Matt eight years ago, filed a petition for legal separation last month, according to Rush & Molloy. The columnists say Lauer withdrew her petition, but sources inside the network are on red alert to manage the story. Indeed, one source at a rival broadcast network tells TMZ that NBC is deeply worried that a messy break-up, especially involving the couple's two kids -- and another on the way -- could damage Lauer's image as morning TV's golden boy. A rep for the couple told Rush & Molloy that the pair is "not divorcing." It's unclear why Lauer had a change of heart and withdrew her petition.

Jessica Hooks Up with John Mayer

If a secret hotel tryst is any indication, Jessica Simpson and John Mayer appear to be making sweet music together, despite past protestations to the contrary. TMZ spies spotted Simpson and Mayer at the tony Four Seasons Hotel in Beverly Hills last week. There's been considerable buzz about the story, and several reports suggested that it couldn't be so. Now, other sources have come forward saying that TMZ is right on the money.

Here's how it went down: Mayer was the first to arrive at the hotel's bar, and he actually chatted up one of our spies and asked her upstairs to "talk." She declined. Not long after, Jessica arrived and made a beeline for her friend and musical collaborator Romeo Antonio, who was sitting at a table. When Antonio subsequently hit the boys' room, Mayer was there and asked if any romance existed between Antonio and Jessica. Apprised that there was not, Mayer then returned to the bar, talked to Simpson for about ten minutes, and then the two left the bar together and disappeared into an elevator. They were never seen again -- that night, at least.

At least, that's the message after their bodyguard allegedly manhandled a photographer who was waiting for Brad Pitt and Angelina Jolie outside their hotel in Pune, India, where she's shooting scenes from the forthcoming film about slain Wall Street Journal reporter Daniel Pearl. It all went down Saturday afternoon, according to the Associated Press, when Pitt and Jolie were leaving their hotel, the Le Meridien. A British photographer was trying to snap shots of the couple, and that's when their bodyguard reportedly attacked. He grabbed the photog by the neck and started yelling at him-and it was all caught on tape by Indian television. "I couldn't breathe. He had his fingers on my windpipe and he knew what he was doing," the photographer told the Hindustan Times. That'll teach him to mess with Brangelina, no doubt.

Moss Kicks Doherty Back into Rehab

Amid reports that his girlfriend Kate Moss was not happy with his drug-addled ways, Pete Doherty has entered rehab once again and called off the remainder of his British tour with his band Babyshambles. Photos surfaced of the singer looking, well, very disheveled the other night, and reports said that he had been kicked out of Moss's house half-naked at 3:30 in the morning after the two got in a huge fight. Here's hoping that this latest round of rehab will finally set Doherty's ship straight.

Madonna visited yet a third orphanage in Malawi on Friday, fueling more speculation that she's planning to adopt a child from the impoverished African country, despite her publicist's denials ... Kevin Federline makes his acting debut this week on "CSI," on an episode called "Fannysmackin'." (If only we were making this up.) He plays a teenage thug who harasses investigators while they work ... Yes, Captain, they are insane: A Star Trek fanatic purchased the 78-inch model of the Starship Enterprise used in the title sequence and pilot of "Star Trek: The Next Generation" for $576,000 at a Christie's auction Saturday. The sell-off of all kinds of Star Trek memorabilia, including set pieces and costumes, raked in more than $7 million.