In her Playmate data sheet from 1995, former "Baywatch" star Donna D'Errico lists among her turnoffs "people who talk behind other people's backs" and "overly jealous people." She should have also listed "the undead."

Seems Donna doesn't deal well with haunted houses, ghosts and the paranormal. The soon-to-be former Mrs. Nikki Sixx strapped on a camera and went inside Waverly Hills Sanatorium, a derelict tuberculosis hospital where 63,000 people died during the "White Plague" epidemic. If that wasn't scary enough, she encountered a creature scarier than anything you've ever seen before -- Gary Busey!!! 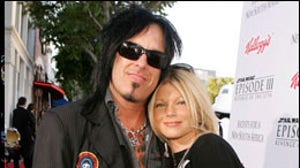