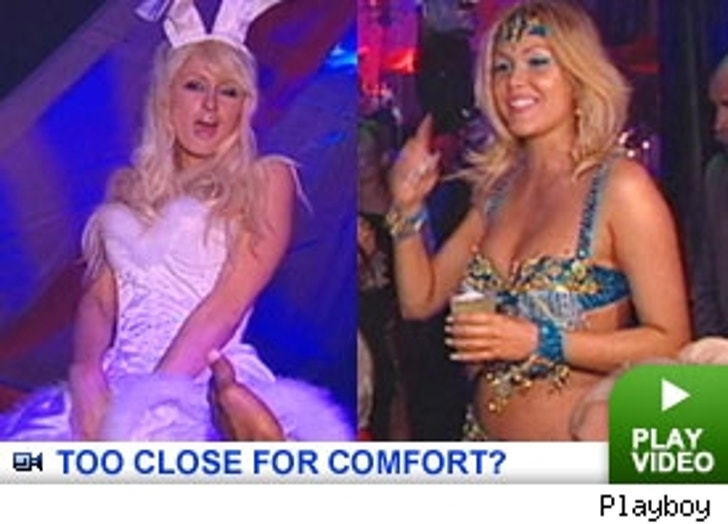 Leave it to Hugh Hefner to bring Paris Hilton, Shanna Moakler and Travis Barker all together again.

All of the players from one of Hollywood's most sordid love triangles showed up to Hef's annual Halloween bash over the weekend and despite the violent history between the ladies, none of them came to blows with each other.

Jeremy Piven, Three-6 Mafia, Nicky Hilton and Pauly Shore were also enjoying the mansion scenery, along with stars like Owen Wilson, who was spotted getting cozy with a mystery blonde dressed as an angel. And while most of the costumes skewed towards the skanky, the winner of tasteless costume of the night went to a man: Bill Maher. The comedian arrived as the late Steve Irwin, stingray barb through his chest and all. Come on Bill, "South Park" did it already. We thought you were more clever than that.

No party would be complete without Paris Hilton dancing horribly to one of her own songs and Hef's fiesta didn't disappoint. As partygoers looked on, the heiress, who donned her own version of the classic Playboy Bunny outfit, writhed to her "hit" song "Stars Are Blind."

After watching her dance, you may wish you were too.