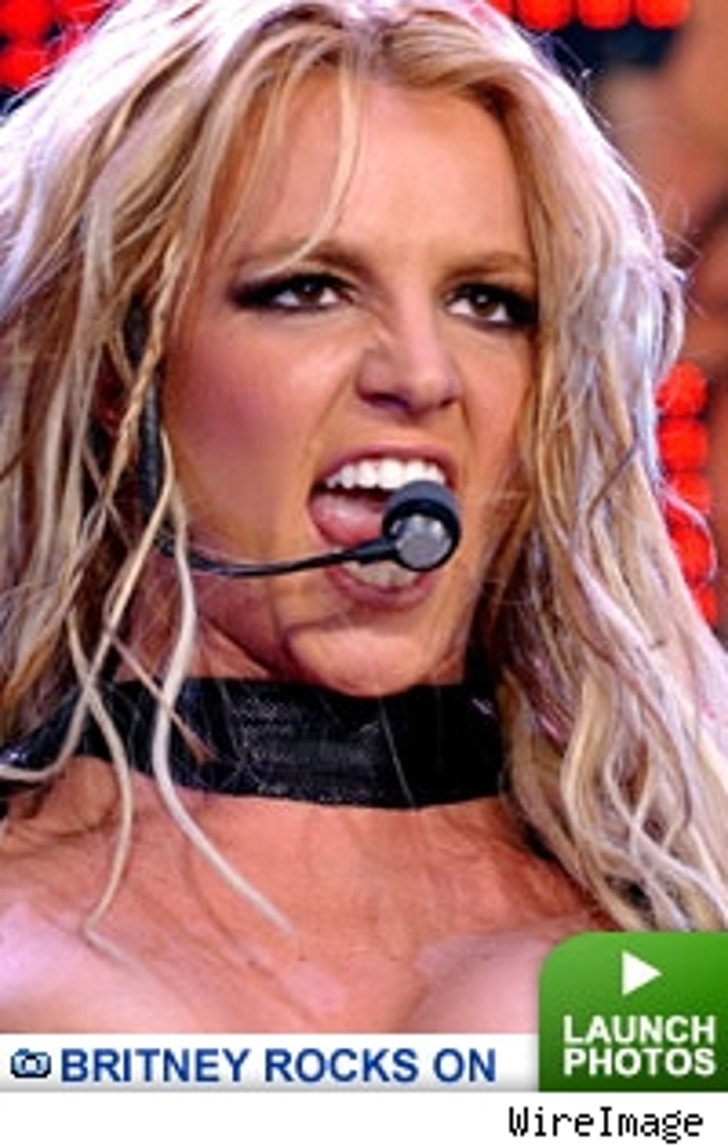 Britney Spears has clearly gone off the rails after her split with K-Fed, and it's time for an intervention. But who's going to step in and stop this train wreck? Not a soul, sources tell TMZ.

The problem is, anyone who might be close enough to tell the 24-year-old Britney to get things in order (and put on some panties) is also on the Britster's gravy train, so they don't want to bite the hand that feeds them, we're told. Her mother Lynne, who's being supported by her daughter, has all but given up trying to get Brit to shape up and calm down, and can't even get in touch with her. And her father Jamie has always stayed mainly in the shadows. What's more, few people outside the family appear have much sway with Britney – except, by the look of things, Paris Hilton.

Believe it or not, it seems that the Fed-Ex may actually have been at least a steadying influence on Britney, even though he's hardly a paragon of upright citizenship himself. Ultimately, says one source close to the family, "The only person that can stop Britney is Britney."

Will Chris Rock Ditch The N-Word?

After Michael Richards' infamous rant prompted a ban on the N-word, TMZ went on the hunt to see whether comedian Chris Rock would be putting the kibosh on a staple of his act. Unfortunately, answers were hard to get. We called, we called, and we called, but his rep just couldn't get a reply out of Rock.

So the question is: Is Chris going to be cagey and not commit? If that's the case, it could be an incredibly smart move, because everybody in the world will be watching his next television special to see if he'll use the N-word.

And we're guessing that Michael Richards will be one of them.

Lindsay: Another Day, Another Bitchfight?

Lindsay Lohan flipped out when she saw Jessica Biel at an event in L.A. the other night, because Jessica's assistant used to work for the freckled phenom – until a few months ago, when she quit.

Page Six reports that Lohan, upon seeing Biel and the woman at the GQ Men of the Year awards, screamed, "If she stays, I'm outta here! I can't look at that girl!" But Lindsay's tirade elicited not so much as a shrug from Jessica: "It was really uncalled for. Jessica and everyone else ignored her." Even more humiliating, says the Post, was Will Ferrell's reaction when he heard about Lindsay's tantrum. Turning to Leonardo DiCaprio, Al Gore, and Ben Affleck, Ferrell scoffed, "Who cares about that freak anymore, anyway?" eliciting laughter from the crowd. Lohan's rep said that the outburst didn't sound like Lindsay, and Biel's rep said, "Jessica is a professional." Snap.

A judge in Malawi ruled that human rights groups can monitor Madonna's parenting practices while she and husband Guy Ritchie wait for their adoption application for little David Banda to wend its way through the courts. David's birth dad, Yohane, said that he hoped the case would help make it easier for foreigners to adopt children in Malawi ... Sandra Bullock isn't pregnant, she tells People. The actress says that she and husband Jesse James "are not with child, but we are pregnant with ideas." All right, then. ... Director Martin Scorsese's next project might be an adaptation of the historical tome "The Last Duel: A True Story of Crime, Scandal, and Trial by Combat in Medieval France" for Paramount, reports Variety. It's the story of a government-sanctioned duel between two French knights ... Those Ralph Fiennes – Ellen Barkin rumors continue to heat up. The 43-year-old Fiennes, who's always had an eye for the mature ladies, was seen at Orso restaurant in New York with the 52-year-old Barkin, according to In Touch magazine, and then went to a play, where Ralph "couldn't take his eyes off" Ellen.