Fists flew and blood spilled as a man who recently worked as Wilmer Valderrama's bodyguard unleashed a ferocious attack on the streets of Hollywood last night. 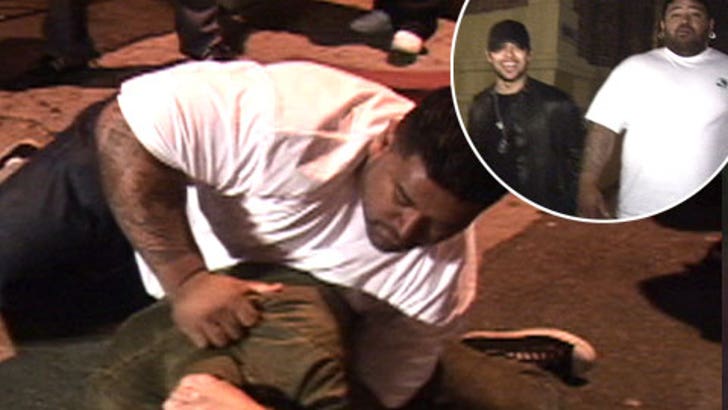 It doesn't appear that he was working for Wilmer last night, as the star wasn't anywhere near Area nightclub in West Hollywood, but the two men have a tight history together.

TMZ cameras rolled as the bodyguard, who goes by the name Tah Dow, and a random clubgoer took a heated argument into the street, when the clubgoer raised his fists and yelled, "Hit me first!" As the clubgoer got within Dow's reach, the burly bodyguard grabbed him and slammed him to the ground while screaming, "There are no cops here to save you right now!" He continued to pummel the man; repeatedly slamming him to the ground, headbutting, slapping and even ramming his head into a wall.

After the pulverizing stopped, Tah Dow screamed racial taunts at the man as L.A. County Sheriff's Deputies, who arrived after the beating, stood there and listened. One deputy even appeared to smile as the screaming continued.

UPDATE: TMZ spoke with a rep from Valderrama's camp who says, "Wilmer is in Germany. He has not yet seen the tape."