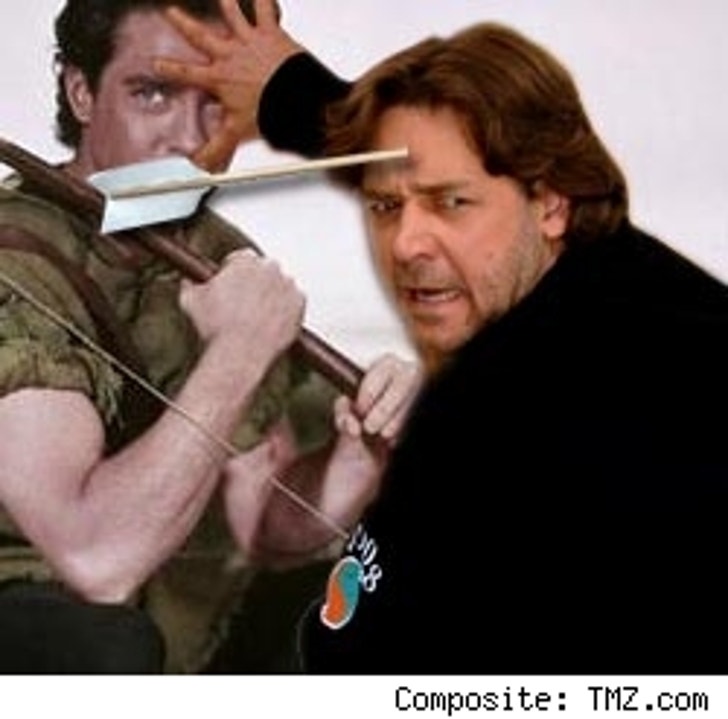 "Nottingham" refers to the legendary town so often pillaged by English folk hero Robin Hood, and the script, penned by "Sleeper Cell" executive producers Ethan Reiff and Cyrus Voris, does for the Sheriff of Nottingham what the muscial "Wicked" did for "The Wizard of Oz": It shows the traditional antagonist in a far more sympathetic light.

With the sale of "Nottingham" estimated to be in the low seven figures, Reiff and Voris are, no doubt, exceptionally merry men, as is Crowe: He'll be taking his usual $20 million against 20% of the gross.

For anyone living under a rock for the last thousand years, Robin Hood operated in medieval times with a band of "Merry Men" - roughly 140 pious and courteous archers who robbed from the rich to feed the poor. It's a measure of the times we live in that the sheriff, who'd be played by Crowe, is now the sympathetic character.

The film has no director formally attached, but insiders say that it's on the fast track at Universal, where it's being produced by Imagine Entertainment, the production company run by Ron Howard and his partner Brian Grazer. In addition to Howard, director Ridley Scott's name has been mentioned as a leading candidate to direct "Nottingham." The two collaborated on last year's "A Good Year," based on the Peter Mayle novel of the same name, and are said to have an excellent rapport.