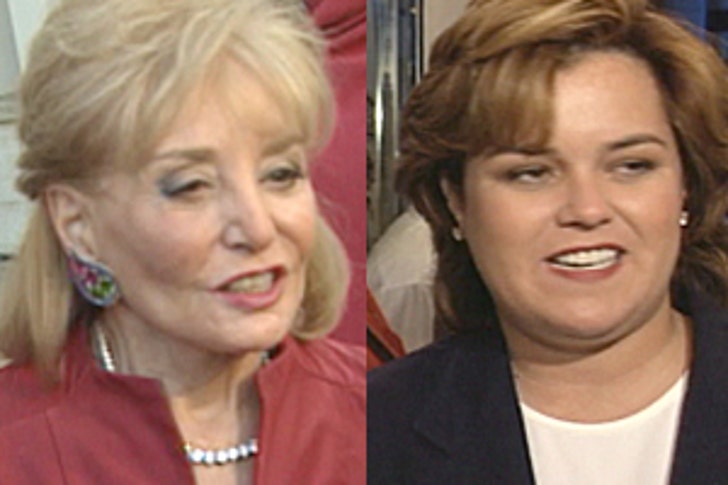 For those of you who've been wondering how Barbara Walters has been handling the insane slide of "The View" into a bare-knuckles cage match between Rosie and The Donald, New York magazine today offers this glimpse into the chaos:

Viz, "'Barbara has the exterior of a debutante,' her friend Dan Rather notes, 'but the heart of an assassin.' The dilemma confronting Walters: How does an old-school debutante-assassin operate in the crude new world of celebrity thuggery? Trump and O'Donnell are perfectly happy to trade blows and spatter blood, on the theory that WWF warfare is more reliable than subtle maneuvering at the court, and the low road is preferable to losing...

Or as Trump, the Sun Tzu of shamelessness, tells me in his office-shrine on the 26th floor of Trump Tower: 'There are some sound bites you can't beat by taking the high road.' "

As is also revealed in the piece, Rosie may be laughing all the way to the bank -- again:

"[Rosie] is credited with an over 20 percent hike in the ratings in the key 18-to-49 female demographic, which has fueled speculation about her bright future on daytime TV. Will ABC cash out Walters's stake and retire her in favor of O'Donnell, who, after all, had her own very successful show from 1996 to 2002? The betting in Las Vegas at last month's programming-executives convention was that O'Donnell will leave soon to launch her own show, for either ABC or a major syndicator. At minimum, O'Donnell, who's said to be pulling down nearly $3 million from The View, about twice what Vieira was paid, will likely be demanding a big raise."