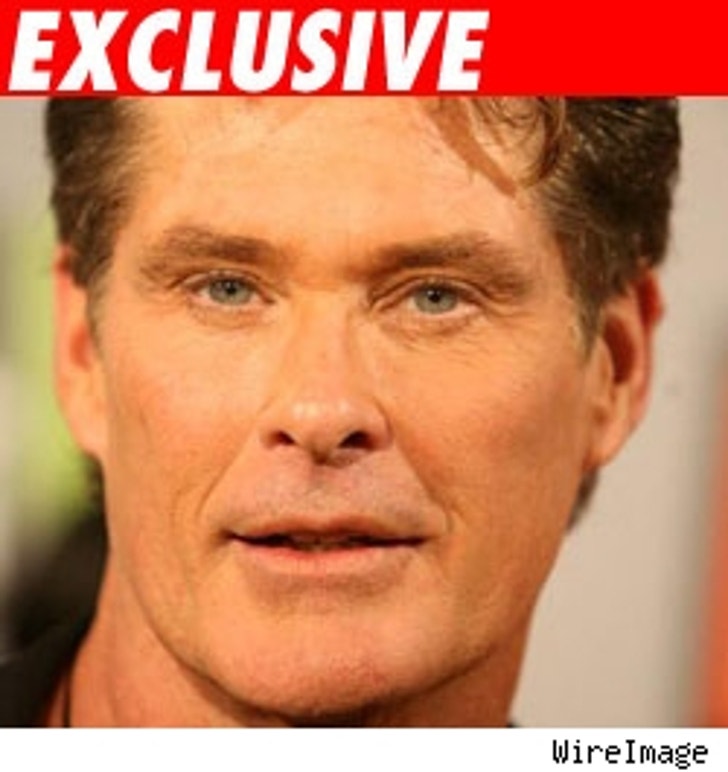 David Hasselhoff has issued the following statement to TMZ in the wake of the leaked videotape that showed him visibly intoxicated.

"More than a year ago, I made a difficult decision, for the sake of our children and myself, to file for divorce. To this day, my ex-wife has engaged in conduct designed to punish me by repeatedly publishing false statements to the press. Despite her fabricated claims, I have, from the outset of this painful divorce, consistently taken the high road by not responding to the myriad of false allegations made against me by her out of consideration for our children. I recognize that public discussion of the issues which exist between us is not something which is in the best interests of our daughters.

But recent events have made it impossible for me to continue to remain silent. My ex-wife, and her latest attorney (who seems to share a thirst for publicity) recently suggested that I had not only been physically abusive to her, but that I was also physically abusive towards our two daughters, as well. This latest claim is not only utterly false, but it is also obscene. Our daughters are outraged by the falsity of their mother's claims and urged me to allow them to go to the press to challenge these claims. I discouraged our daughters from doing so, but I agreed that I would finally come forward and challenge these absurd claims made by their mother.

My ex-wife's actions are nothing more than a transparent attempt to garner attention from the media and to hurt me. Her claims that I ever physically abused her or our children are ludicrous. It is inexcusable that my ex-wife has perpetuated these false claims against me, without consideration for the toll her actions have taken on the girls. However, it is clear that she will resort to any means to obtain the attention of the media in order to satisfy her own perverse need for publicity, regardless of its impact on our daughters or me.

The lack of veracity of her claims have, and will continue to be borne out in the marital litigation. Unfortunately, our children have been subjected to physical and emotional abuse on numerous occasions, but it has been at the hands of their own mother, which abuse has been documented by the Court appointed experts in our marital proceedings.

While I acknowledge that I am a recovering alcoholic who must deal with my own issue on a daily basis, my ex-wife has refused to deal with her own issues, which include having tested positive for alcohol and illegal substances in response to court ordered testing. Although she has publicly denied having tested positive, proof of her drug use is part of the Court record.

I truly hope that my ex-wife will get the help that she so desperately needs for her own sake and for the sake of our children, and that in the future she will refrain from perpetuating falsehoods and selfishly compromising the well-being of our children so that they can move forward with their lives, with their privacy respected. I look forward to the day that our marital litigation is behind me, so that our children and I can move forward with our lives in peace."

"Although Mr. Hasselhoff has publicly admitted the truthfulness and authenticity of a video showing him severely intoxicated in the presence of his minor daughter while she was in his custody, his private conduct behind the scenes continues to be deplorable in that he refuses to accept responsibility for his actions by transferring blame to his ex-wife. This is the behavior of a man in denial who arrogantly spins his explanations to the media in an attempt to save face. The spinning is over.

"While his continuing abuse of alcohol violates court orders, more importantly it is harming their children's lives in what has become an all out 'hate fest' by Mr. Hasselhoff against his ex-wife."