Stone-faced and silent, a clean-cut Anand Jon was taken out of a Beverly Hills courtroom wearing a brand new steel accessory around his wrists -- and TMZ caught the whole thing on tape! 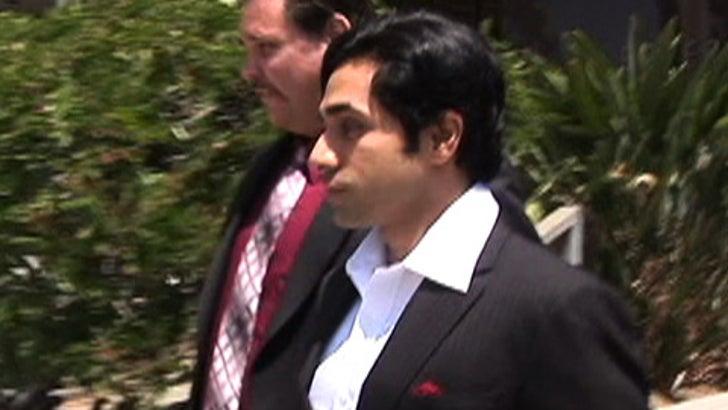 As TMZ reported earlier, Jon was in court facing 13 new counts of sexual misconduct, when plainclothes officers, acting on a warrant issued in Dallas, placed the fashion guru under arrest on three counts of committing sexual assault with a minor in the state of Texas. Tears streamed down the faces of his mother and sister as he was tossed into the back of a police vehicle.

Jon, who often hung out with stars like Paris Hilton and Paula Abdul, faces a total of 46 counts of sexual wrongdoing in California. Jon's lawyer, Danny Davis, claims that, "It appears to be in this case, fairly, gossip among young models that's gone a little wild."

UPDATE: Shortly after the arrest, Anand Jon returned to a Beverly Hills courtroom -- in cuffs -- where he pled not guilty to the 13 new charges filed against him. During the proceeding, the prosecutor referred to Jon as a "serial rapist." The judge then remanded him to custody until he can post the $500,000 bail on the new Texas charges. Jon is due in Beverly Hills court again on August 28.