Just out of the hospital, Owen Wilson spent the holiday weekend with a low-key family BBQ ... which also played host to a herd of snapping paparazzi.

Cameras caught a brief glimpse of Wilson as he arrived to his brother Luke's home, with Owen quickly ducking into the backyard when he found the front door locked.

Though his entrance was botched, Wilson was able to exit the party unnoticed. 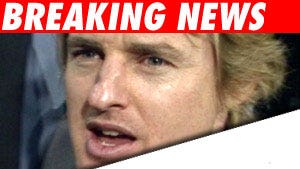