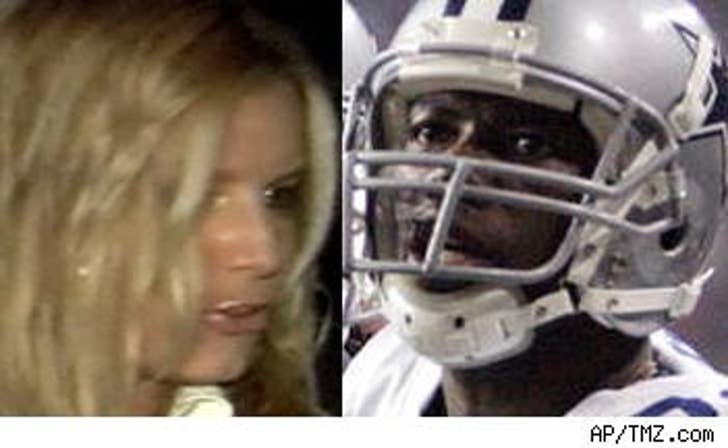 UPDATE: Terrell Owens has a sense of humor, at least he thinks he does -- and now he's saying that he was only "being funny" when he spewed venom at Jessica Simpson for playing Delilah to his teammate Tony Romo's Samson.

The Dallas Morning News is reporting that T.O. has already apologized to Romo, and is trying to tell Jess sorry, too. "I tried to get [Romo] to call her so I can explain to her that she doesn't really know me and that I can be funny,

Jessica Simpson is a huge fan of Tony Romo and his Cowboys, but the love sure isn't reciprocal -- especially from bigmouthed wide receiver Terrell Owens.

T.O. wasn't happy that Jessica's first appearance at Texas Stadium coincided with Romo's worst showing of his career, and he voiced his displeasure, reports ESPN.com. "Right now, Jessica is not a fan favorite -- in this locker room or in Texas Stadium," he says.

It's nothing personal, actually -- T.O. just wants Tony to throw some TDs. "With everything that has happened, obviously with the way Tony played and the comparison between her and Carrie Underwood, I think a lot of people feel she has taken his focus away."

And, in true Owens fashion, he's got something up his jersey sleeve: "Oh, I got a message for her when we make the playoffs. Just stay tuned."