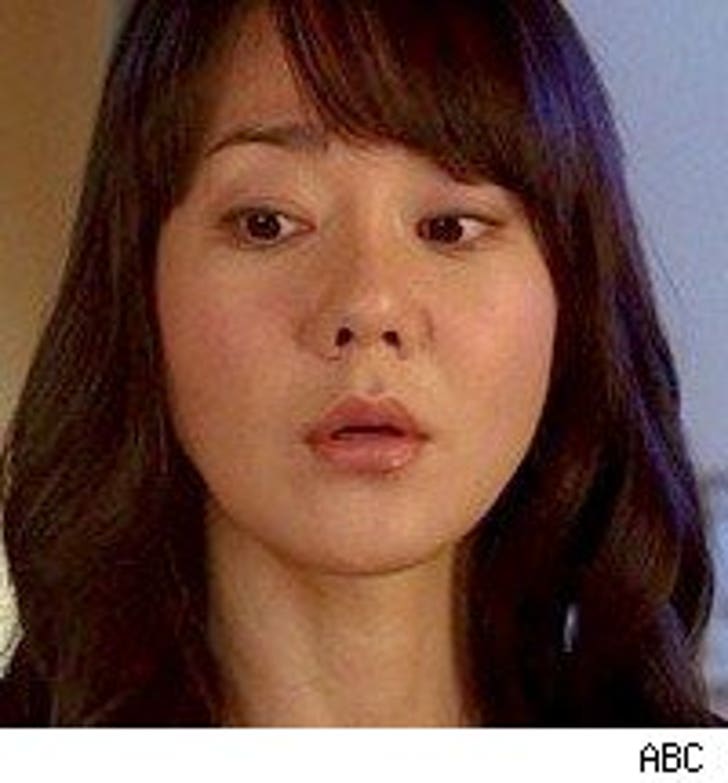 After this episode, we only have one more left until we go on Writers Strike hiatus. It's been a good run so far and I will be curious to see how the writers adjust after the hiatus. Here's a suggestion: Answer some questions. Just a thought.

For all you "Lost" Diary newbies, here's how it goes: I gather with a group of friends watching "Lost," writing what happens on the show as it happens, and throwing in my two cents along the way. Ari and Lauren are with me tonight -- and it's Ari's birthday! What will the producers of "Lost" get him? Let's roll ...

9:02 -- Lawnmower Man brings Desmond and Sayid lima beans to eat. Yet another reason why it's better to be on the island.

9:03 -- Has anyone ever learned English faster than Jin?

9:05 -- Time again for my favorite game -- flashback or flashforward? Sun is preggers galore -- so it has to be a flashforward.

9:09 -- Jin is toy shopping, presumably in the future, so it looks like maybe he gets off the island too. That makes six, as in Oceanic 6 -- so I guess Aaron doesn't count.

9:10 -- Kate is trying to explain what went on with Faraday and Charlotte. I hate when people on this show explain things to other people on the show. Can't we just skip all that?

9:12 -- A cryptic note was just passed through the door -- things are getting good.

9:14 -- Jin and Jack are talking English over breakfast and I am bored.

9:15 -- Sun wants to head off to Locke's camp. Maybe things will finally get good.

9:20 -- Any doubt about flashforward or flashback has been removed as Sun was ID'd by a nurse as an Oceanic 6. This whole pregnancy thing is so boring, the only thing than can spice this up is if the kid comes out black.

9:22 -- Jin trying to make his way to the hospital is getting silly. Am I watching a Nora Ephron movie here?

9:25 -- Juliet just told Jin that Sun had an affair and Sun slapped her. Lauren cheers.

9:29 -- Jin is about to go off on a fishing trip with Bernard and I am more excited about this proposition than I should be.

9:31 -- Time for Bernard to dispense some sage-like advice. Bring it on, my man.

9:32 -- How does Jin understand the concept of "karma"? Did that come up in Sun's lessons already?

9:35 -- The illiterate woman just jumped over the side of the boat with chains wrapped around her -- and no one seems to care except for Sayid and Desmond.

9:40 -- The captain opens up with "So what can I do for you?" Gee, let me think. How about starting with getting me off this damn boat and back to civilization?

9:41 -- Desmond just found out that they are on Charles Widmore's boat, and he took it in stride. Little strange.

9:42 -- The captain just gave a whole long spiel about the fake plane crash, the 324 bodies and Ben. This guy just gave more of an answer in 10 seconds than most people on this show so far.

9:43 -- Juliet is painting a pretty picture for Sun's future -- if she stays on the island.

9:44 -- Sun is still having her baby. Is there going to be something interesting about this? If all she does is have a baby I am going to be seriously let down.

9:45 -- For the record, Lauren thinks Asian babies are the cutest -- followed by black babies.

9:52 -- "I made dinner." -- Jin. He can really do no wrong in my book. Definitely the most underrated character on the show.

9:57 -- Looks like we've been watching a Jin flashback this whole time.

11:23 -- Right now I am hating this episode. I feel like they purposely manipulated us with Jin's flashback and the reveal really wasn't even all that interesting as a result. And the reveal of Michael being the man on the boat was as un-suspenseful as it was predictable. I need to sleep on this one a bit before I just come right and call it one of my least favorite "Lost" episodes ever. See you in the morning.

We had three reveals tonight, if you will. Let's throw out Sun being one of the Oceanic 6 since they've revealed who is an Oceanic 6 person the same way every time. That leaves two reveals:

1) Michael is the man on the boat.

2) Jin is dead (though apparently this is open to interpretation).

This one angers me. I feel like the show purposely manipulated us (again) to do a reveal. You'll remember in the season finale, Jack spoke about his dad for two reasons -- to prove he was a little nuts and to cover up the fact we were getting a flashforward and not a flashback. Ok, fine. I'll give you that one.

But now you have Sun screaming for Jin in her delivery as a way to make us think he's alive when he's really dead. That's just lazy and deceiving in a way that isn't interesting to the story -- it was done purely to throw us off. In Jack's case, when you look back at it, it's a way to show us just how far off the deep end he has gone. But with Sun, sure you could argue she's distraught over the death of her husband, but that's not why they did it -- they were trying to cover their tracks, pure and simple. Been there, done that.

It all comes down to what we were told and how we were told it. If you had said to me before the show starts, "We find out who the man on the boat is and that Jin doesn't make it off the island" -- I probably would have slapped you. NEVER RUIN "LOST" FOR ME!!! But then I would said alright, that's cool -- should be a good episode. But I'm sorry, I just can't get behind it. When the most surprised I was all episode was when Juliet told Jin about Sun's affair, something isn't right.

I give this episode a D, even though I am really having a hard time finding anything I liked about it.

One last quick point -- Jin's grave. Is he actually buried there? If so, he could be one of the two people that makes up the difference between Jack's story that eight people survived the plane crash, but then we are left with the Oceanic 6. If he isn't, and he died on the island and the body in that grave is one of the 324 bodies the captain talked about, then I find it a little odd that Sun would visit him -- but a grave is a grave, I guess.

One last, last quick point -- If Jin is actually still alive and on the island, they better have a damn good reason for it. Already, I am getting worried about too many "not really dead" moments on "Lost" in seasons to come.

I get the feeling as I write this (and talk to a person or two about it) that I am a bit on my own in not liking this episode (to be read: hated it). So here is my task to you: Can you give me a good, concise reason why this episode was good? I am flexible here.

Over at thelostdiary.com, I do a question-and-answer column every week. I had to skip this week (again) but I just got my laptop back from the shop, so I have all the emails and I am ready to roll. Don't feel like you have to ask a straightforward "Lost" question. Have fun with it. Click here to send me a question (and make sure the subject says LDQA -- I get so much spam on that account it's insane).