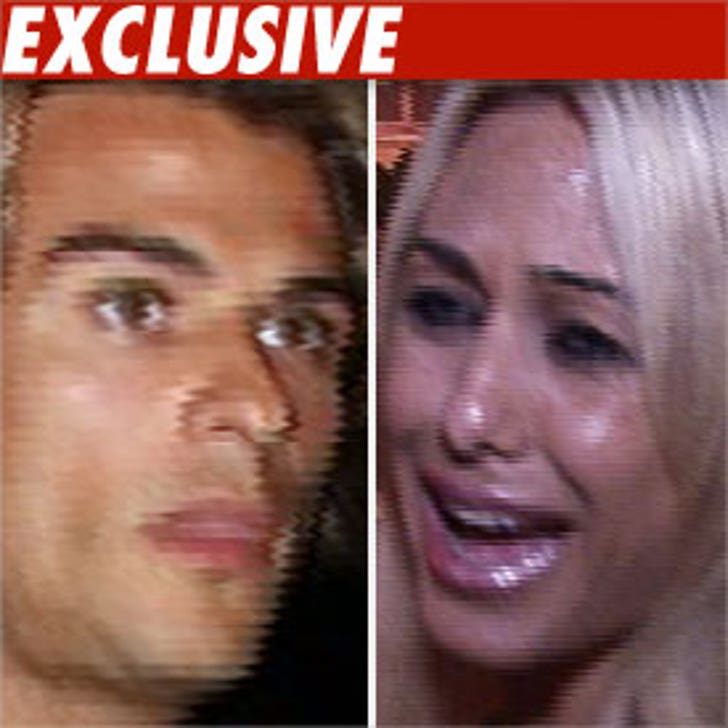 Shauna Sand's husband Romain Chavent is fuming over allegations he beat his wife and threatened to sell naked photos of her children -- chalking the devastating allegations up to Shauna being "completely crazy ... like a buffalo."

In what turned out to be one hell of a candid phone call, Romain ferociously defended himself -- and then proceeded to slam Shauna, claiming her own mother doesn't like her, she fights with half the hairstylists in town and that he's going to blacklist her from the Hollywood nightclub scene.

Here's the transcription -- you just gotta read it:

TMZ: What's going on with this restraining order?

Romain: Yesterday, she called me and said, "I'm at court filing for divorce. You need to come tomorrow morning at 8:30 to sign for divorce or I'm putting a restraining order on you." I thought she was joking!

TMZ: And when did you hear that she actually did it?

Romain: I just heard. The first time I heard about it was on TMZ. Someone called and told me to look at the website.

TMZ: These are some crazy allegations! Are they true?

Romain: SHE'S completely crazy – completely! Of course they are not true.

TMZ:
So you didn't take pictures of her kids?

Romain: The pictures are not true. Of course not. This is not the first time - when she was divorcing with Lorenzo, she was making allegations he wanted her to be a prostitute!

TMZ: OK, so you know all this but yet you still chose to be with her?

Romain: She's the nicest person on earth, but she can be crazy. Like a buffalo. She just goes mad. She's bipolar.

TMZ: What about that you punched her breasts?

Romain: Not true. The only thing that's true... The first time she did a restraining order – we had an argument in front of the kids like a year or two ago - she ripped my shirt and scratched me - and yeah, I pushed her, but that's it. Nothing since. Punched in breast? Not true!

TMZ: So, where is this coming from do you think? Why is she doing this?

Romain: On Sunday, we had an argument on the phone. She just had her surgery you know... I was at lunch in Beverly Hills with a friend. She called and said, "I need water, bring me water." I said, "I'm having lunch in Beverly Hills, so I can't now." She said "it's finished, it's over, get your stuff at the concierge." I said, "You want a divorce cause I won't get water?" Ridiculous! I thought she was kidding.

TMZ: So that was it?

Romain: Later that night she called me and said "when are you coming over?" I said "Are you kidding me?" She told me she wanted a divorce. She wants to divorce every five minutes. Real couples don't do that -- they have arguments and figure it out. I said, "I'm not coming back home." She said she would throw all my stuff out the window.

TMZ: So it's over? For good this time?

Romain: I've been with her a long time. I love her -- I'm in love with her. But here's a line you can understand... I love her but I don't like her. Her mom said the same thing... "I love my daughter, but I don't like her". When she's nice, she's adorable. But she can go psycho without any reason, that's it. She fights with half the hair stylists in town. She thinks she's the biggest celebrity – but without TMZ, she would be nobody.

TMZ: So you won't see her again?

Romain: If there's a restraining order, then I have no choice. These allegations affect my life, my work. I never thought she'd go this far. If I call her, she's gonna call the cops. I'm promoting clubs, and she'll swing by I'm sure, but I'll tell the doorman not to let her in. This is not the first time. If she wants war, I know stuff about her. I would never say what. But if I was an asshole, there's so much stuff I could say. When you love someone, you can't do crazy stuff like this. I'm not fucked up in my mind. I'm not going to ruin the lives of the kids. That's irresponsible.

TMZ: So last time I'll ask... these pictures of the kids?

Romain: No, not true. It's ridiculous.