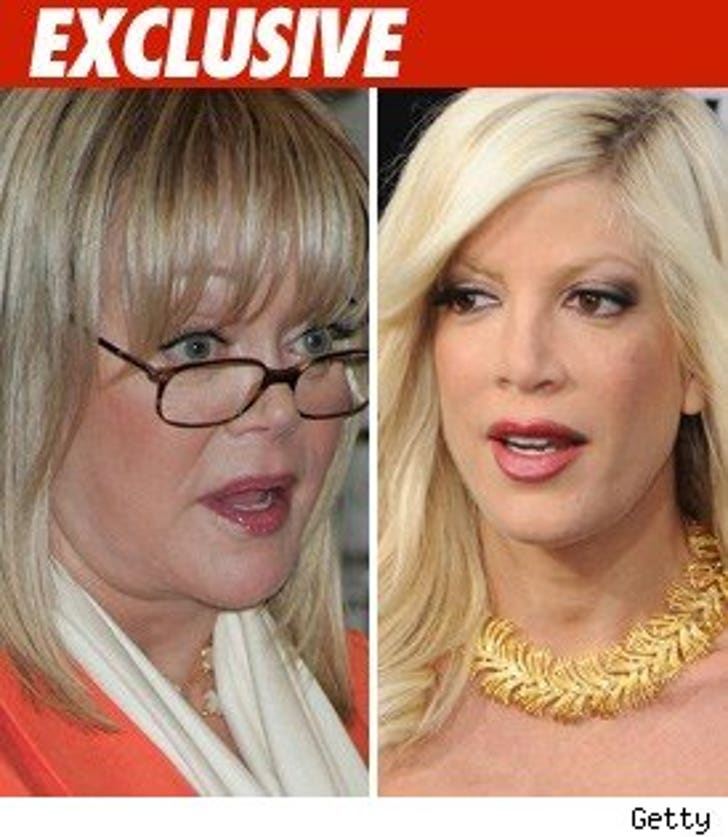 Candy Spelling -- the mother famously at war with her daughter -- has taken the bold step of communicating with Tori Spelling through TMZ ... and her opening line isn't gonna get her a lot of invites. Here's the open letter in all its glory:

EXCLUSIVE TO: TMZ.COM
TO: MIDDLE-AGED REALITY SHOW STARS (LIKE MY DAUGHTER)
FROM: CANDY SPELLING

I Know many middle-aged people have issues about their parents and their upbringing. I did. My memories didn't match all those of my mother, and, funny thing, it's the same way with my daughter.

Life has consequences. What you say is on the record. Other people have feelings.

I have a vested interest in this subject. My daughter, Tori's, two-part season finale revolves around my granddaughter's first birthday party and how she has made what seems like an agonizing decision to invite me.

I did get an invitation just in time for the RSVP deadline. I'm sure its delivery will be on next week's episode with some comment about my house or driveway or street or something they won't like. I wonder if that will be spread out over one part or two. Sigh.

A big party wasn't how I envisioned meeting my granddaughter for the first time; but, hey, this is Hollywood, and my grandchildren have become reality show props, too. At the time I emailed "yes," I didn't realize I was being set up for a two-parter, even though it was clear I was being invited to be part of a segment for my daughter's reality show.

Spoiler alert. Don't read this if you plan to sit through an hour of people looking at their watches and saying "she's late." I decided my first meeting with my granddaughter should be on home video, not primetime cable; so I emailed that I would not be attending.

Back to other reality stars. My husband taught me that the plots have to be fresh and updated. The same old whining gets tired after a while. Enough complaining about what may or may not have happened during first grade or YMCA camp, or what vegetable you were forced to endure, especially when you are privileged enough to be on TV and get paid for it.

For all the reality show personalities, please remember that real life doesn't get edited to make things better or worse or get better ratings. You're responsible for what you do. Life isn't just a show. And your families can't just be props. Make your own season finale without creating conflicts you will regret later.