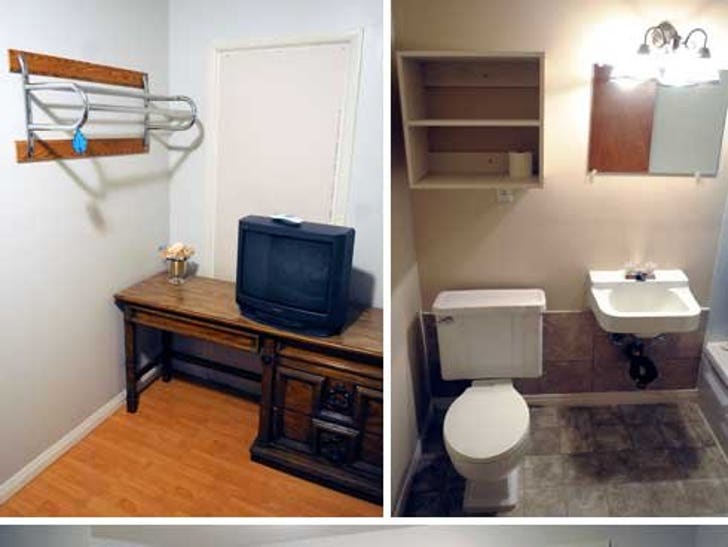 UPDATE: The room below is in the motel where Jenkins' body was found -- and the photo agency who owns the pics say it's the same room -- and coat rack -- where Jenkins hanged himself. The agency says the photos were taken about 6 hours after the body was discovered -- after the room had been inspected and cleaned.

The manager of the motel where Ryan Jenkins hanged himself says he was found hanging from the coat rack behind the door and his feet were touching the ground.

The manager says it was odd that he could touch the ground. We do not know if Jenkins sedated himself before hanging himself.

Residents of the motel (it's used for sober living) tell TMZ Jenkins, who walked around the grounds from time to time, looked nothing like the video and pictures that have been circulating. He was skinny, his cheeks were sunken and he was wearing clothes that looked like he purchased them at a thrift store.

As for the mystery woman who accompanied him, she was very pretty, between 20-25 years old and was "extremely calm" when she checked in. The manager says he was a bit suspicious when they first pulled up in a PT Cruiser. The car pulled up -- ironically -- next to a dumpster rather than in a parking spot. He waited in the car while she checked him in. She left 20 minutes after Jenkins checked in and has not been seen again.

UPDATE: TMZ just spoke with the motel manager who said he did not see a suicide note when he discovered the body.

Officials have Jenkins' laptop -- but it's unclear what was on it.