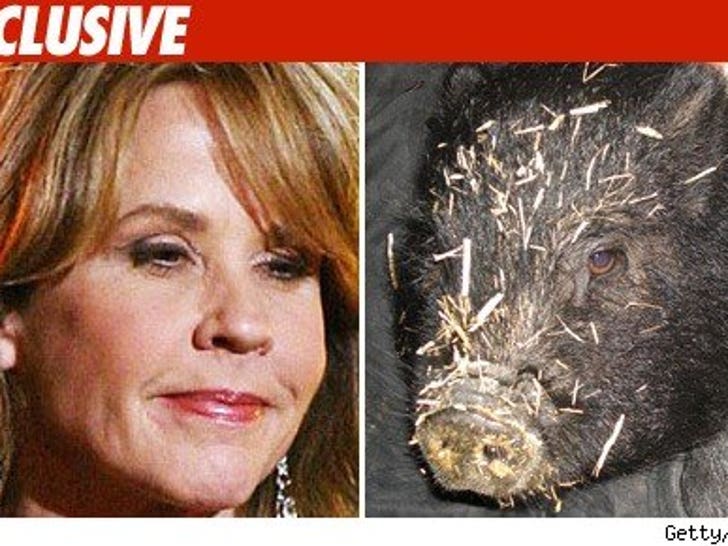 "Exorcist" star Linda Blair is smack in the middle of a deadly situation -- after a neighbor gunned down a dog that escaped from Linda's animal shelter and attacked the neighbor's pet pig. 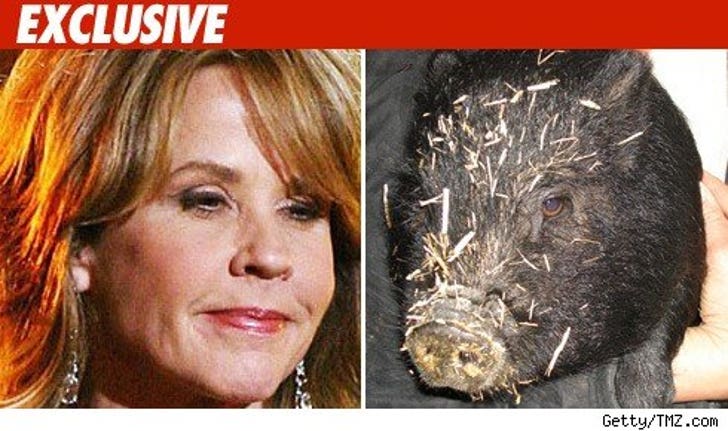 The drama unfolded Sunday afternoon. Cops confirm the dog -- which Linda described as a lab/hound mix -- escaped from her WorldHeart Foundation in Los Angeles and ran over to a nearby ranch.

The ranch owners claim they saw the dog put a "death grip" on their miniature potbellied pig named Gerty.

The ranch owners claim they grabbed a gun and fired some warning shots in an attempt to scare the dog -- but the dog didn't loosen its grip. That's when they decided they had to shoot the dog.

According to the ranch owners, they fired off 5 shots before the dog released the pig from its jaws. The dog ultimately died as a result. Gerty the pig suffered puncture wounds -- but is expected to make a full recovery.

Police investigated the situation -- and decided criminal charges will not be filed against the pig's protectors in connection with the shooting.

UPDATE: Linda released a statement about the incident ... click through to read it.

Ms. Blair was not on the property at the time the incident happened. It has taken over 48 hours to get through the shock of this horrific tragedy, collect all the necessary facts and file statements with the Los Angeles Sheriff's department, including ones given by the eye witness LBWF volunteers, before releasing our statement to the press and the public. The necessary and truthful necropsy report on our beloved lost dog will be made available within a week.

On Sunday January 17, as I was driving to our mobile adoption event with our dogs, I received a devastating phone call. It is my understanding one of our rescued dogs, after a walk with a new volunteer, was accidently placed into a non kennel area. Suddenly, the volunteers heard the disturbing noise of several of the neighbors' dogs fighting with each other through their property fence lines, which happens quite often. During this time it appears our dog made his way over the fence and traveled up the alley between our properties.

The Deputy Sherriff report says, the dog jumped into the pig's enclosure and bit the pig. One of our volunteers never heard the pig, but the woman's loud, hysterical screaming led him to jump up to a high position to see what the commotion was about. The location was documented by the Sherriff's Deputy. I was present when the volunteer made the following account to the Deputy, "I did not see a pig or a woman by this time, they must have taken cover, only a dog running in fear with nowhere to go in this small area. A man with a gun appeared, proceeded to chase, corner and unload the gun in rapid fire. He shot the dog 6 times in the head, eyes, neck and body, all within a close 3-5 foot range - execution style, killing the dog instantly." The necropsy report will show the six casings still embedded in the dogs head, eyes and body. In addition to this account, other neighbors are willing to go on record as ear shot witnesses, to hearing 6 rapid fire shots, as they rang throughout the neighborhood.

A second volunteer ran to the scene and found two neighborhood women who had witnessed the event standing in a state of shock. He told the Deputy, they tearfully exclaimed, " the dog jumped on and bit the pig, and then the woman was screaming and the dog was running away, when the men came out and killed what the ladies thought might be one of our dogs." Our volunteer then told the Deputy, " I looked back and realized in fact it was one of my favorite and beloved rescued dogs. I got teary eyed, feeling the onset of both shock and sadness, wondering what in fact had just happened to make someone shoot a dog so violently."

I have expressed my deepest concerns for the condition of the pig. The Deputy informed us that, in his opinion, the injury to the pig was not life threatening. As a former pig owner, animal lover and neighbor, I have offered through the responding Deputy, to provide or pay for the medical care, if needed, for injuries the pig may have sustained in this unfortunate incident.

I again was present, when the second volunteer went on explaining to the Deputy, "the property owner and an unknown man, with gun still in hand, made a very scary threat concerning the safety of our remaining rescued dogs." The complete statements have been legally filed with the Los Angeles Sheriff's department through the responding Deputy.

We know this dog to be very sweet, gentle, and kind. This dog had no human aggression in him whatsoever. It's important to note that we are a non-breed specific rescue and the dog was simply a lab and unusual Egyptian-like, hound mix. This dog was one of the many wonderful companion animals we have rescued. Despite this tragedy, we will continue towards our goal of saving lives.

We are in an American Crisis of pet overpopulation and people losing their homes, many times being forced to abandon their companion animals. Several of these pets were given shelter here at LBWF. I have been rescuing our Southern California dogs and cats since 1997. I served our country volunteering in Louisiana, providing a safe-haven for 51 dogs, which is all on record. I take service to our country very seriously, giving up my life as I knew it, to rescue my animal friends and provide a safe shelter and life for them until they find their forever loving homes. I encourage everyone to join a nonprofit, as volunteering is a selfless act to help a fellow person or animal in their time of need. I encourage all to help out in your communities, wherever you may live.

Please do go to our website www.LindaBlairworldheart.org for more information and to make a much needed donation.ã

*The dog's remains have been donated to a veterinary college for education and the necessary autopsy report for the Sheriff's records.