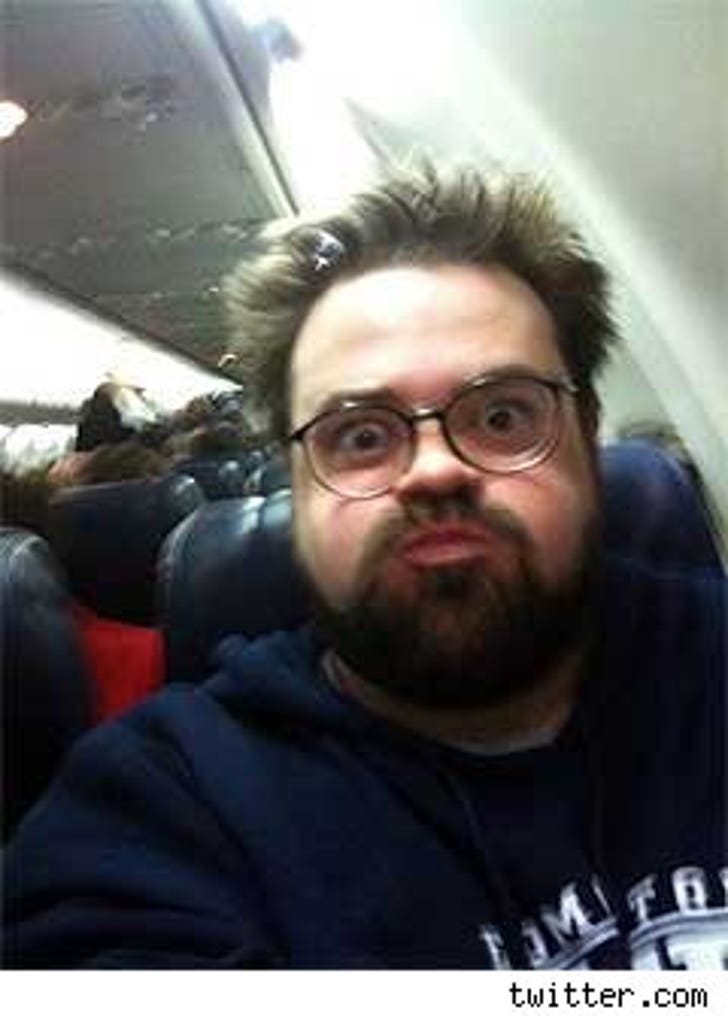 Kevin Smith was thrown off a Southwest Airlines flight yesterday for being a "safety risk" -- a polite way of saying he was deemed too fat to fly.

Smith was flying from Oakland to Burbank and was, according to his own tweets, already seated and ready to go when a Southwest attendant named Suzanne "told me Captain Leysath deemed me a 'safety risk.'"

He flew into Oakland on a SW flight, and tweeted later (along with the photo on the right) that he eventually flew out on one as well.

Smith also received a $100 voucher for his trouble and a few apologetic tweets from SWA, but based on the number of four-letter words used on Smith's Twitter page ... we don't think the apology was accepted.

UPDATE: Southwest responded to Silent Bobgate on their blog.

UPDATE 2
: The SW site seems to be down. Read the blog entry by clicking below.

2/13 Flight 2394, Oakland-Burbank:
Many of you reached out to Southwest Airlines via Twitter last night (2/13) and today (2/14) regarding a situation a Customer Twittered about that occurred on a Southwest flight. It is unusual for us to handle individual Customer concerns in so public a forum, but with so many people involved in and aware of the situation, you also should be involved in the solution. First and foremost, to Mr. Smith: we would like to echo our Tweets and again offer our heartfelt apologies to you. We are sincerely sorry for your travel experience on Southwest Airlines.

As soon as we saw the first Tweet from Mr. Smith, we contacted him personally to apologize for his experience and to address his concerns on both Twitter and with a personal phone call last night and another call this afternoon (2/14). Since the situation has received a lot of public attention, we'd like to take the opportunity to address a few of the specifics here as well.

Mr. Smith originally purchased two Southwest seats on a flight from Oakland to Burbank – as he's been known to do when traveling on Southwest. He decided to change his plans and board an earlier flight to Burbank, which technically means flying standby. As you may know, airlines are not able to clear standby passengers until all Customers are boarded. When the time came to board Mr. Smith, we had only a single seat available for him to occupy. Our pilots are responsible for the Safety and comfort of all Customers on the aircraft and therefore, made the determination that Mr. Smith needed more than one seat to complete his flight. Our Employees explained why the decision was made, accommodated Mr. Smith on a later flight, and issued him a $100 Southwest travel voucher for his inconvenience.

You've read about these situations before. Southwest instituted our Customer of Size policy more than 25 years ago. The policy requires passengers who cannot fit safely and comfortably in one seat to purchase an additional seat while traveling. This policy is not unique to Southwest Airlines and it is not a revenue generator. Most, if not all, carriers have similar policies, but unique to Southwest is the refunding of the second seat purchased (if the flight does not oversell) which is greater than any revenue made (policy is available at www.southwest.com). The spirit of this policy is based solely on Customer comfort and Safety. As a Company committed to serving our Customers in Safety and comfort, we feel the definitive boundary between seats is the armrest. If a Customer cannot comfortably lower the armrest and infringes on a portion of another seat, a Customer seated adjacent would be very uncomfortable and a timely exit from the aircraft in the event of an emergency might be compromised if we allow a cramped, restricted seating arrangement.