Heidi's rep tells TMZ, "Heidi is looking to move out due to all the fake bad press that Spencer controls. She's tired of it and is looking for a place and wants to focus on her acting career."

We're told Heidi -- pictured above with Spencer in Malibu last Friday -- is looking for a new place to live ... in Malibu.

As TMZ first reported, Heidi and Spencer called the police on Heidi's mom a few weeks back ... so there's been plenty of turmoil.

A source close to Heidi and Spencer tells TMZ the tension in the relationship has been building for a while now ... "It wasn't just a sudden thing."

Now it makes sense ... On Tuesday, Heidi tweeted, "I am not Heidi Pratt, I am Heidi Montag."

UPDATE: Spencer's sister, Stephanie Pratt, tells TMZ, "I hope whether this statement is true or not that they are both happy in whatever life decisions they make." 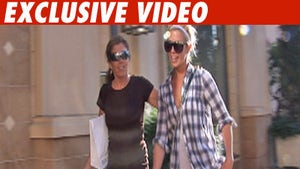