The day after pics of her estranged husband The-Dream surfaced frolicking on the beach with another woman, singer/actress Christina Milian was spotted still wearing her wedding ring in L.A. on Tuesday.

Although the couple married just last September, The-Dream released a statement yesterday saying he and Christina came to the decision their relationship was "unsuccessful" at the end of 2009. 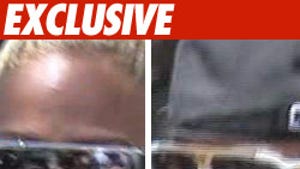