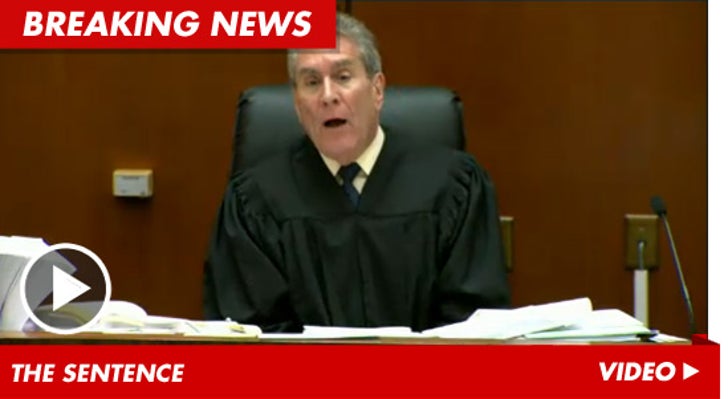 Judge Michael Pastor threw the book at Dr. Conrad Murray, sentencing him to 4 YEARS IN PRISON. But Murray will not spend a single day in prison because of a new California law. He'll serve his time in L.A. County Jail. And in jail, at most Murray will only serve half the sentence.

The judge was angry, talking repeatedly about Dr. Murray's documentary in which he laid the blame at Michael Jackson's doorstep. The documentary clearly weighed in the judge's decision to give Murray the max.

As for restitution, Judge Pastor ordered Dr. Murray to pay "appropriate restitution" to the Estate and to MJ's kids at a later date ... but the judge seemed dubious about the $100 million request by the prosecution.

Judge Pastor says it's irrelevant to him that Michael might have met this fate with some other doctor. The fact is, Pastor said, Michael Jackson died because of the actions of ... Dr. Murray."

The judge said he looked at Murray's whole life, and he was impressed. But he added Dr. Murray's recklessness with Jackson overshadowed the doc's good deeds, calling the treatment, "a cycle of horrible medicine."

The Judge noted, "Dr. Murray engaged in a recurring, continuous pattern of deceit and lies."

The Judge was incredulous, saying far from being remorseful, "There's umbrage and outrage on the part of Dr. Murray against the decedent." The judge was making note of Murray's critical comments about MJ in his recently-aired documentary.

In the end, the judge said, "Dr. Murray abandoned his patient," calling his conduct ... "medicine madness," "egregious" and "a disgrace to the medical profession."

Brian Panish, attorney for Jackson family, read a statement: "We still look at each other in disbelief. Is it really possible he is gone?" The statement goes on ... "We are not here to seek revenge. There is nothing you can do here today that will bring Michael back." In terms of the sentence, the family said: "We respectfully request you impose a sentence that reminds physicians they cannot sell their services to the highest bidder."

Prosecutor David Walgren, who asked the judge to impose the maximum, 4-year prison sentence, reminded the judge ... Dr. Murray repeatedly lied to authorities about the events in the bedroom where Michael died. He also noted the recklessness of Murray's medical treatment. Walgren called Murray's treatment a "pharmaceutical experiment." Walgren said, "The defendant was playing Russian Roulette with Michael Jackson's life every single night."

Walgren also asked for $100 million in restitution for MJ's kids, because that's what Michael Jackson would have made in the "This Is It" tour. Walgren also wanted Murray to pay a fair amount for the $1.8 million funeral.

Murray's lawyer, Ed Chernoff, told Judge Pastor, Dr. Murray did not want to address the court, but the lawyer said no doubt Jackson's death is a tragedy that demands punishment, but Murray's "book of life" is much better than this one chapter. Chernoff noted Murray was born "dirt poor" in Grenada and led an exemplary life that made him a cardiologist. But Chernoff noted Murray "will always be known as the guy who killed Michael Jackson." Chernoff did say, "Michael Jackson was a drug seeker, and Dr. Murray was wrong in providing it."

As for restitution ... Chernoff shockingly never addressed the obvious -- that Jackson is worth more dead than alive. All he said was Murray couldn't afford to pay it..