The family from TLC's "19 Kids & Counting" chose a unique way to commemorate the life of their 20th child, who passed away this week in a miscarriage -- they took an artsy picture of the fetal corpse ... and distributed it at the memorial.

Jubilee Shalom Duggar was due in April ... but Michelle Duggar suffered a miscarriage on Sunday in her 2nd trimester.

The Duggars held a memorial today at their church in Arkansas, where they distributed the above photographs -- containing messages like, "There is no foot too small that it cannot leave an imprint on this world."

The photos were first posted on Twitter by a family member -- and then surfaced on a fan site.

We reached out to the family for comment -- so far, no word back. 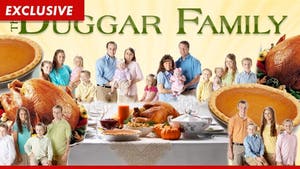