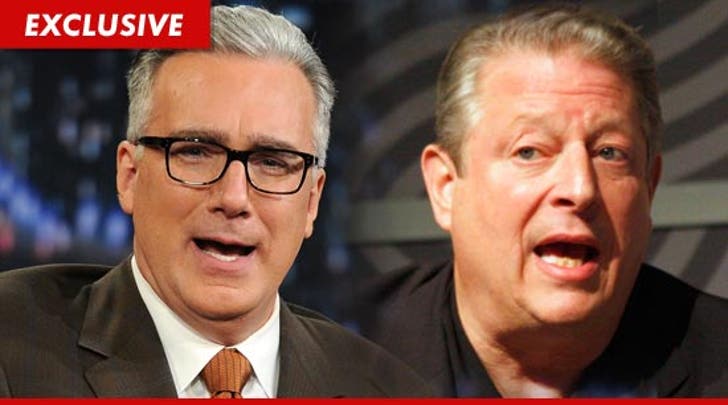 Keith Olbermann tells TMZ, he's furious with Al Gore for firing him from Current TV -- claiming, "I will be filing [a lawsuit] against them."

As we previously reported, Current just fired Olbermann from his show "Countdown" -- and Al Gore released a statement, claiming Keith was disrespectful and disloyal to viewers.

Now, Keith is firing back -- "It goes almost without saying that the claims against me implied in Current's statement are untrue and will be proved so in the legal actions I will be filing against them presently."

Keith also says, "The truth of the ethics of Mr. Gore and Mr. Hyatt [Current co-founder] will come out."

Keith suggests there had been an internal war raging between him and Gore for more than a year -- though he doesn't go into specifics.

"I'd like to apologize to my viewers and my staff for the failure of Current TV.

Editorially, Countdown had never been better. But for more than a year I have been imploring Al Gore and Joel Hyatt to resolve our issues internally, while I've been not publicizing my complaints, and keeping the show alive for the sake of its loyal viewers and even more loyal staff. Nevertheless, Mr. Gore and Mr. Hyatt, instead of abiding by their promises and obligations and investing in a quality news program, finally thought it was more economical to try to get out of my contract.

It goes almost without saying that the claims against me implied in Current's statement are untrue and will be proved so in the legal actions I will be filing against them presently. To understand Mr. Hyatt’s “values of respect, openness, collegiality and loyalty,” I encourage you to read of a previous occasion Mr. Hyatt found himself in court for having unjustly fired an employee. That employee’s name was Clarence B. Cain.

In due course, the truth of the ethics of Mr. Gore and Mr. Hyatt will come out. For now, it is important only to again acknowledge that joining them was a sincere and well-intentioned gesture on my part, but in retrospect a foolish one. That lack of judgment is mine and mine alone, and I apologize again for it."